June 23, 1944
Dearest Mrs. Retherford,
How have you been? I hope you
are in the best of health and
spirits.
I am sending this letter to
Butterfield since I do not
know your exact address. Hope
it reaches you without much
delay.
I would like to go back
to Jerome and live with all
my friends again. Someway or
the other I like Jerome better
than this camp.
How is your weather? Is
it just the same? It gets
very hot here but we do
not prespire like in Jerome.
I have met a lot of
my old friends. They sure
have changed. The are now
all taller than me. Hope
I can catch up with
them soon.
I have seen Eddie and
Toshimi on the train. I saw
Fred at the canteen yesterday
I think he lives in block

32.
Have you heard from
any of my classmates? If
you are writing to anyone
please give them my regards.
Sure miss all of you.
Please say hello to Vanette.
Would give anything in the
world to be with you again.
Always,
Marion Tsutsui 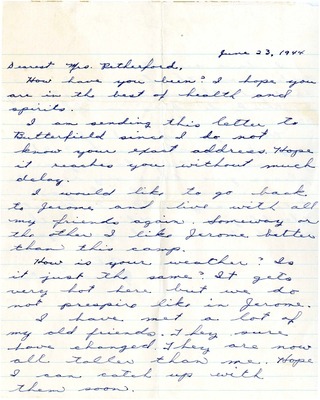