Letter from Marjorie Nagaoka in Lodi, California, to Hazel Retherford at Rohwer Relocation Center in Arkansas.

Rte. 2 Box 188-a
May, 1945
Lodi, Calif.
Dear Mrs. Retherford,
Thank you for the "Junior Outpost"
and your nice post card. I was very em-
barrassed when I saw my letter in your
papers. At first I didn't recongize my letter
When I showed it to my mother she said
that I sure wrote an awful letter. You
should give me notice in advance.
School is just fine. Did you have
your tests (I think they're called Suppliment-
ary tests) I made pretty good grades. I
averaged 9.01. In english I made the
best grade. It is 11+ (plus) . I averaged the
highest in our school! (it's surprising
for me isn't ?)
We went to see "Thunderhead," it was
good. We went with some friends.
Where did Joyce and Rose go? I didn't know
they went out
In our school, in arithmetic I am in per-
centage. I hope to catch up to the girls
who are ahead soon they were 31 pages
but now they are 14 pages ahead.
When does your school end ? Ours
ends in 2 weeks more.
What are you
studying? We are
studying India (my second time)
(over)
We study it differently here. We write
outlines and menorize it then she gives
us a test.
In our English I'm ahead of our class.
I know nouns, verbs, pronouns, adjectives,
adverbs. I'm in 7th grade reading.
We made may baskets but mine
didn't turn out very well.
I've earned $13.50 since we have come
back. From the eggs and from helping my
father. He has 40 acres so there is always
plenty to do at the vineyard and at home
too.
Well I have 5 more letters to write so
I'll close now.
your former pupil,
Marjorie
Nagaoka
After 5 days return to
Marjorie Nagaoka
Rte 2 Box 188-a
Lodi, California
Mrs. H. Retherford
31-6-F W.R.A.
McGehee, Ark. 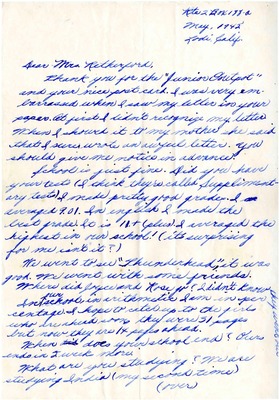