11-4-F
Rohwer, Ark.
June 17, 1944
Dearest Mrs. Retherford,
I reached Rohwer safely.
I was going to write to you
as soon as I got there but
my letter box was packed.
We reached there about 11:
30. We got there before our
baggage so we had
to wait for a while.
On the way I was think-
ing "when did I see this road" before
after I saw the station
where we stopped to eat
on the way to Hot Springs I
knew that
we were on the same
road as when we were on the
way to visit Vannette. We
crossed the bridge on which
you told us was the way to
Rohwer
The center is very much
different from Denson. I
am sure I will get
lost.
Block eleven is a pretty
block. We have colorful
gardens because they have
flowers
of different colors.
We have a garden made
in the front of our
apart-
ment. The people are
very nice to us.
(turn over)

Well I better close
now, and will you tell
Vanette Hello for me?
Thank-you.
(Don't mind the way I
print or misspell the
words.)
Sincerely yours,
Natsumi Tomita
P.S.
Answer me soon
so I won't be lonesome.
I am the only one in block
from 28 in Denson so I
am lonesome. 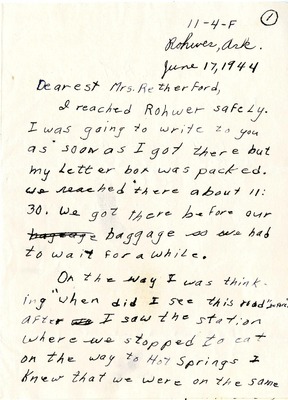