Letter from an ex-United States soldier interned at Rohwer, to Homer M. Adkins, Governor of Arkansas

This is a letter from an ex-United States soldier that had been relocated to Arkansas due to his Japanese ancestry. The soldier is angry that the Governor will not allow Japanese Americans to work outside the camps. He refers to the Governor as "Hitlerian" and a "saboteur" of his own country, by denying other Americans the right to help with the war effort. He does not sign his name to the letter, but calls himself, "Ex. U.S. Soldier." 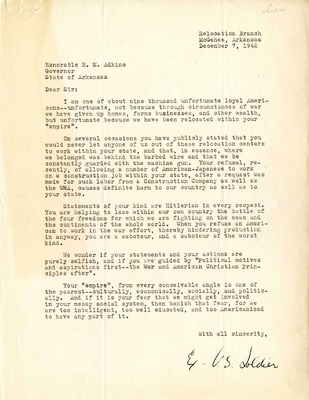