Letter written by John M. Bramlette, a manager with the Utah Construction Company to D. Palmer Patterson, Arkansas's Director for the United States Employment Service. The Utah Construction Company, constructing Norfork Dam, requested the use of 34 Japanese Americans to work on the dam's construction due to labor shortfall. Williams states that he will pay for housing and food at $.50 an hour during a 48-hour work week. Williams has been looking for laborers within a 50 mile radius and is still short of men.

After the bombing of Pearl Harbor on December 7, 1941, President Franklin D. Roosevelt signed Executive Order 9022, creating the War Relocation Authority (WRA). The WRA selected ten sites in which to imprison more than 110,000 persons of Japanese ancestry, over two-thirds of whom were American citizens. Two of these centers were in the Arkansas Delta, one at Rohwer in Desha County, and the other at Jerome in sections of Chicot and Drew counties. Over 16,000 Japanese Americans were incarcerated in these two centers between October 1942 and November 1945. The Norfolk Dam was approved for development by Congress under the Flood Control Act of 1938, and the United States Army Crops of Engineers started construction in 1941. Funding for this project, however, was not awarded until the Flood Act of 1941, which included authorization for hydroelectric power. The United States was in need of more power plants in order to increase manufacturing for possible wartime. The Utah Construction Company and Morrison-Knudsen Construction Company were contracted to build the Dam. During World War II, this project suffered from manpower shortages since most of the working age men were being drafted for military purposes. 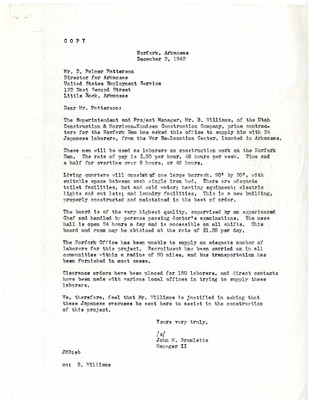