Resolution by the Manzanar Citizens Federation

The Manzanar Citizens' Federation is requesting employment as farm labors for loyal Japanese Americans. This resolution was formed in order to show their resolve and willingness to work for the greater good of America.

After the bombing of Pearl Harbor on December 7, 1941, President Franklin D. Roosevelt signed Executive Order 9022, creating the War Relocation Authority (WRA). The WRA selected ten sites in which to imprison more than 110,000 persons of Japanese ancestry, over two-thirds of whom were American citizens. Two of these centers were in the Arkansas Delta, one at Rohwer in Desha County, and the other at Jerome in sections of Chicot and Drew counties. Over 16,000 Japanese Americans were incarcerated in these two centers between October 1942 and November 1945. The Manzanar Citizens' Federation claimed that the discrimination and violations of civil liberties needed to be fought by citizens of the United States, or first generation Japanese Americans who were born in the United States (called Nisei). This group of individuals held their first meeting on July 14, 1942. 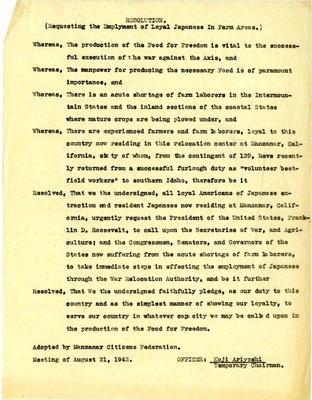