Benjamin C. Totten informs Governor Harris Flanagin that Colonel Joseph Harolson, a legislator from St. Francis County, was captured at his home and sent to the penitentiary in Little Rock where he died. His neighbor, Colonel Bagby was also captured on the same night, imprisoned, and subsequently died.

Rondo Ark
January 27th 1864
Sir, As Governor of the state it
is proper you should be advised
of the fact that Col Joseph
Haralson, member of the Legislature
from St. Francis County is no more.
He died in the penitentiary at
Little Rock on the 30th of November.
He and his neighbor Col Bagby
were captured at their homes on the
same night, and both died at Little Rock
from the sufferings of the incarceration
they died near the same time[,] Col Haralson
first. Col Bagby's friends succeeded in
getting him out of the Penitentiary a
day or two before his death. ([illegible] deaths)
Both of them had sent their property out
on Red River in the bottom part of the summer. After
their death, their widows sent a joint agent
with a power of attorney to take charge of
the property, the agents[sic] name is Lowery. I get the
[illegible] facts from M-Jesse C. Bagand(?) who
is the son in law of Col Haralson & came out here
in charge of property. He got them from the agent
Lowery.
Yours etc Benj C Totten
To His Excellency H. Flanagin 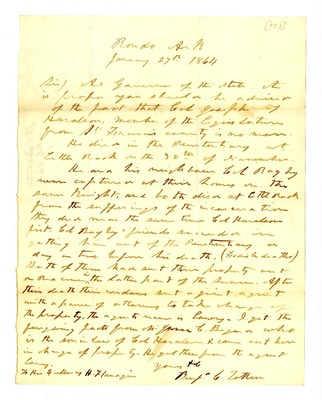