Letter from Governor Harris Flanagin to Major General Magruder addressing whether or not a company needs to continue serving as a regular military company or be reduced to a guard unit.

[Page 1] Executive Office
Washington Arkansas
Feby 27th 1865
Maj Gen Magruder
Comdg Dist of Arks
Dear Sir
I have the honor to enclose
a memorial which has been addressed to me for your
consideration. The company referred to has been engaged
nearly a year, but was always at their place; at least a
large portion of the company have been during service at
Fulton for the last four months; the [illegible] and mounted
men kept at Fulton were from this company.
I can not particularize as to the good effects from
the company, but within the last month they have
arrested and sent to the army eight men, several of whom
have had made caves in which to hide. Those prisoners
have been sent to this place. Capt Leigh however who is
enrolling officer in Lewisville is no doubt advised as to
their observations, and to him you are respectfully referred.
The locality at the corner of these states and the
condition of the county being intersected by numerous
swamps, bayous, etc., is supposed to be particularly favor-
able to the concealment of the of the disaffected.
This company was organized under an agreement
between Gen Smith and myself, whereby it was agreed
[Page 2] that the troops should be paid by the State, but supported
by the Confederate States, with quarter master, company
and ordnance stores. This agreement continues, but I should
not be willing to treat it as continuing unless with your
consent. The state Archives are at Rondo and can not
be left without a guard. If you so advise the Company
will be contained subject to your command and while
keeping quiet in the section, will guard the records(?) deed
furnish moderate details for duty at other points that
may be desired. The State will continue to pay them
and the Confederate States to furnish supplies. If you
do not approve of this, the Company will be reduced to
a mere guard for the records. It ought to be added
that a considerable portion of the Company are not subject
to military duty, and it has not been permitted to receive
since last spring. While on this subject, the Company
has been led(?) and judged by Capt Carrigan, who was obliged
to the duty by Gen Holmes[;] Carrigan is a C.S.Commissary
Since Capt Newton took command of his regiments[,] Carrigan
has been with him as Commissary. The company has been
chiefly supplied by titles(?) since then. Some person should
be appointed to certify to these claims. Capt James Abraham
is reliable and [illegible] free from that duty. Your attention
is respectfully solicited.
Yr Obt Serv 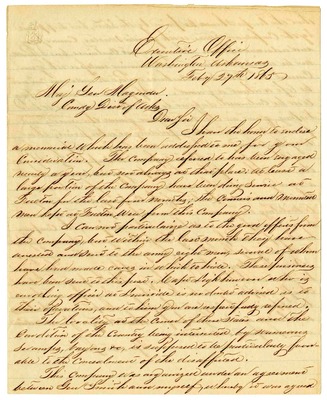