Flanagin informs his wife that the Confederate Army is marching toward Knoxville, Tennessee, the next morning. He states that he wish he could come home, but that to leave at the "darkest hour" would be unimaginable. He concludes by stating he hopes to be home by fall, or at latest, Winter.

Following Arkansas's secession from the Union in 1861, Flanagin served as representative from Clark County to the Constitutional Convention in Little Rock. Flanagin fought in the Second Arkansas Mounted Rifles during the Civil War. In camp near Knoxville, Tennessee, the news of Flanagin's nomination did not reach him until after the election. By the time he was able to arrange for a leave of absence, a telegram arrived announcing that he had been elected governor. Therefore in 1862, Flanagin left active duty to take office. His administration dealt primarily with war-related measures, maintaining order, and continuing government while enduring an invasion. The capitol at Little Rock fell to Union troops on September 10, 1863, at which time Flanagin moved the state government to Washington, Arkansas.

[Page 1] Camp near Chattanooga
July 29th 1862
Mrs M E Flanagin
Dear wife.
I sent a letter by a
man going to Prairie county Arks.
we expect to move too morrow [sic]
towards Knoxvill [sic] Tenn. we suppose
we will stop at Loudon a few
miles this side.
The only news I have
heard from home lately was
by mr S[ ]'s letter.
I should like to go home
but it would not do to think
of leaving at this darkest hour
of our countrys [sic] need.
I feel in hopes that
I can come home this
fall. If not I do not doubt
if I live to get home next winter [Page 2] I am glad mr Ross and mr Speaks
have got off
your Husband
H Flanagin Col
2 arks McRae 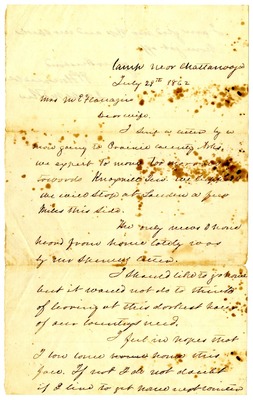