In this letter to his wife, Harris Flanagin is uncertain when the army will leave camp. He hopes a move north will be ordered soon. Flanagin writes the crops are not good and food prices are high.

Harris Flanagin was born in Roadstown, New Jersey, on November 3, 1817. After attaining his law degree in Illinois, he moved to Greenville, Clark County, Arkansas, and began practicing law. He served as deputy sheriff of Clark County in 1841, and was elected state representative the following year. He was again elected to public office in 1848, serving in the state senate for two years. In 1851, Flanagin married Martha E. Nash of Washington, Arkansas. They had three children: Duncan, Nash, and Laura. Following Arkansas's secession from the Union in 1861, Harris Flanagin served as representative from Clark County to the Constitutional Convention in Little Rock. Flanagin fought in the Second Arkansas Mounted Rifles during the Civil War. In camp near Knoxville, Tennessee, the news of Flanagin's nomination did not reach him until after the election. By the time he was able to arrange for a leave of absence, a telegram arrived announcing that he had been elected governor. Flanagin then left active duty to take office in Little Rock. His administration dealt primarily with war-related measures, maintaining order, and continuing government while enduring an invasion. The capitol at Little Rock fell to Union troops on September 10, 1863, at which time Flanagin moved the state government to Washington, Hempstead County, Arkansas. At the end of the war, he received a presidential pardon, but remained disfranchised until 1873. In 1874, Flanagin became a member of the Constitutional Convention and was selected to be chairman of the Judicial Committee. While in Little Rock working to form the new constitution, he fell ill, returned to Arkadelphia, and died October 23, 1874.

[Page 1] Camp near Chattanooga
July 15th 1862.
Mrs M E Flanagin
Dear Wife.
We have been here
about a week. The health of the
troops is improving. Tom Spere
Roj. Geo Hicssberry Speaks Waterman
etc. allive [sic] and well.
our horses have
not got here yet. They were
sent across the country.
Mr Waldrop is out
of camp but to join when we
move. Mr Stroops is not up but
getting well.
We have good water
here and I suppose a healthy
place. I can not give you any
idea where or whene [sic] we will
go further than that our [Page 2] movements depend upon the
movements of the enemy for
a few days at least.
we are in a mountainous
country. Lt Callaway became
Captain Callaway by being made
commisary and is now made
major by being made division
commisary. at least this is
my information upon this
subject and his. There has
been a looseness about it
which I do not fully understand.
We have had no chance
of sending letters for a couple
of weeks and think we
will not have many chanses [sic]
for sometime.
The crops here are not
good. The wheat crops was
but off by the next.
There is some peaches
and apples nice here [Page 3] The prices here are very
high. butter 40 cts - eggs 50 cents,
potateos [sic] $4.00 per bushell. cabbage
25 cents each etc.
we have preaching occasionialy [sic].
on last Sunday and the Sunday
previous we had preaching.
I have been looking for an
advance movement on
Tenneessee for some time. but
these things depend upon
so many circumstances that
we may stay here all summer.
Kiss the children for me.
Your husband.
H Flanagin 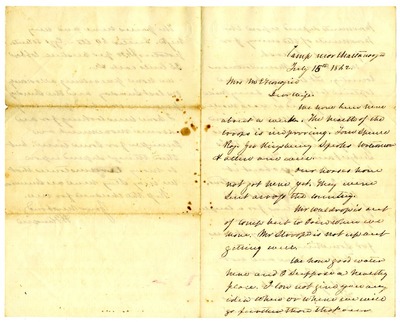