Flanagin writes that all but one of the churches in Springfield are being used as hospitals for the wounded soldiers, and ten or twelve wagons full of wounded Union soldiers had recently left town. The future Arkansas governor also discusses how the mailing system works between him and his wife. He ends by stating that he believes the majority of the women in Springfield are Union supporters.

[Page 1] Camp at Springfield
Sept 2nd 1861
Mrs. M. E. Flanagin
Dear Wife.
We are yet here.
we sent off on Saturday 120 wounded
nurses and surgeons. There is
yet 175 here. It is expected that
they will get off on Saturday
next but that is uncertain.
Bynd has been quite sick. So much
so as to keep his bed for a week,
I think him better but he
improves very slowly.
We have one very
sick man in camp (Mr White)
but he is thought to be improving.
I was at church
yesterday and heard a Mr
Roberts preach a very good [Page 2] Sermon. He is a [Sophist]. I do not
think there was twenty citizens
present. The population of the
town is about 2000
We have a pleasant camp and
our sick are improving.
All the churches in town but
one are filled with wounded.
The northern men sent off
10 or 12 waggons loaded with
wounded. They have buried
the most of those killed. I
suppose there are some 30
which remain unburied.
As soon as we can come here
we are ordered to go to the
southwest corner of Missouri.
It is possible though that we
may not go or receive a short
stay if we do go.
I suppose you will hear
a great many things about the [Page 3] battle which did not take place.
I suppose you get our
letters more regularly than we
get ours. We send the letters
to where they aut [sic] to go
promptly but yours are often
delayed in our part of camp.
a day or two ago letters [ ]
here which had been 35 days
on the road.
Morgan making arrangments
to establish a mail to [ ]
but that will [ ] move
Slow there the present [ ]
I have seen but very little
of the Springfield ladies but
what I have seen has induced
me to believe that there is
a majority of them for the union.
yours
H Flanagin 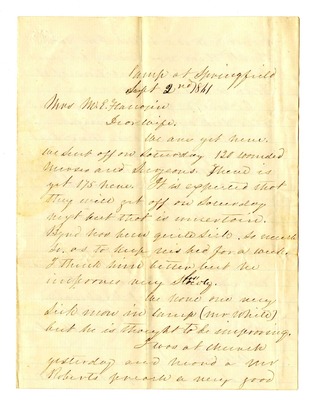