An election had been held on November 24, 1860 to determine the officers of the Lawrence County Regiment Arkansas Militia. John Miller Jr. was elected as the captain with other officers at lower ranks. Colonel Commandant Robert Shaver certified the election with his signature.

Robert Glenn Shaver was born in April of 1831. At the outset of the Civil War, he raised troops along the White River valley for the 7th Arkansas Infantry Regiment, of which he was appointed Colonel. The regiment was known as Shaver's Regiment. He was on the field at the Battles of Shiloh, Prairie Grove, Jenkins' Ferry, Poison Spring, Marks' Mills, and the Red River Campaign. He and his regiment covered the Confederate retreat from Little Rock. After the war had concluded, his activities with the Ku Klux Klan led to serious legal problems, forcing him to flee the state in 1868. He returned to the state near the end of Reconstruction and was appointed sheriff of Howard County. He practiced law in Mena. In the 1890s, Shaver was made commander of the State Guard and the Reserve Militia of Arkansas and received the rank of general. He was also the commander of the Arkansas Division of the United Confederate Veterans (UCV). He passed away in Foreman, Arkansas in 1915.

[Page 1] Head - quarters 60
Regt Arks militia
29 december 1860
At an Election had at Smithville
on the 24th of November 1860 for the purpose
of electing the Commissioned Officer of a
Volunteer Cavalry Company - organized
in Connection with the Regt Arks militia
Lawrence County and designated as the
"Lawrence Cavalry" the following persons
were elected to the several Offices as
follows
John Miller Jr Captain
W. H. Henderson 1st Lieutenant
G R James 2nd do
J. M. Oldham 3rd do.
All of which I Certify to the correct
Given under my hand as
Col Commandant 60 Regt Arks
militia on the day and date first
above written
R G Shaver Col Commandant
Smithville P.O.
Lawrence Co Arks [Page 2] 1861
Lawrence Co.
Militia Election
"Lawrence Cavalry"
Com'd"
16th, Jany 1861. 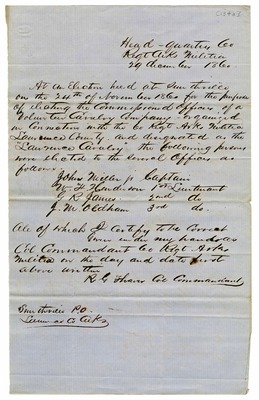