This bulletin from the Arkansas True Democrat contains reports that Confederate President Jefferson Davis had become dissatisfied with Generals Pillow and Floyd, resulting in their suspension. Also, the bulletin shares reports from east of the Mississippi River, including news of a resolution passed by the Confederate Congress urging planters to concentrate on raising hogs and cattle rather than growing cotton and tobacco. The bulletin reports that the Confederate Army had arrived at Boston Mountain in northwest Arkansas following the battle at Pea Ridge.

During The Civil War, newspapers were some of the only sources of information on what was happening in the war. Newspapers like the True Democrat would briefly describe the events and latest news from around the country. It would often also tell which regiments were camped nearby the place of publication, publish proclamations, decrees, and ways the citizens could contribute to the war effort. The Battle of Fort Donelson, about one month prior to this bulletin, was a major blow to the Confederacy. The defeat at the hands of Union general Ulysses S. Grant made way for the capture of Nashville, Tennessee, by the Union. 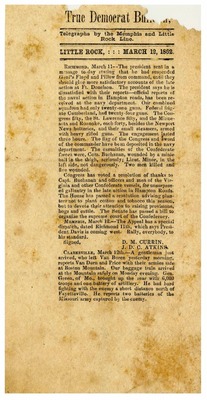