Benjamin McCulloch, Brigadier General in the Confederate Army, writes to Captain Reif that he has found a guide familiar with the areas around Springfield, Missouri. He is hoping that some of Reif's men can be spared to go with the guide, Dr. Robinson, to search out the area. McCulloch makes a point, however, that he believes that McBride's men are not worthy for the mission.

Benjamin McCulloch was born in 1811, and was a soldier in the Texas Revolution, served as a Texas Ranger, a major general in the Texas militia and then a major in the US. Army during the Mexican-American War, then later a Brigadier General in the Army of the Confederate States during the American Civil War. McCulloch's troops, the Army of the West, would win the Battle of Wilson's Creek, Missouri, in August 1861. He would also lead the right wing at the Battle of Pea Ridge, Arkansas, on March 7th, 1862, but would be shot and killed during that battle. His next-in-command, Brigadier General James M. McIntosh, would be killed a few minutes later during the effort to recover McCulloch's body from the battlefield.

Camp Stevens July 25th 1861
Capt Reif
Sir
This will be
handed you by Dr. Robinson of Texas
He formerly lived near Springfield [and]
can be of great use to you as a
guide.
He is perfectly reliable [and] in the
[unknown] of his wishing to examine the
country as far as the vicinity of Spring -
field. you can let him take such
men of your command as may be
willing to go on such an enterprise
you can [unknown] with the companies
of Camps Harbin [and] Lauderdale should it
suit your views. at all events you
must not Genl McBride's command be
supprised [sic] as he has no mounted men for
scouts or spies
Ben McCulloch
Brigr Genl
[command] 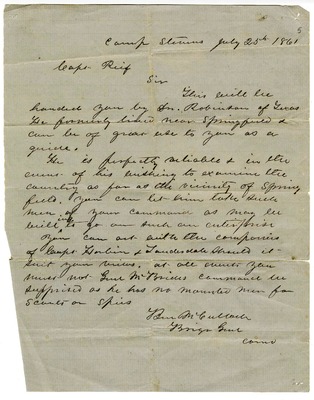