In his letter to his father, William F. Rector describes how Jeff Thompson burned the Yankees' steamships as they came down the river and took blankets and clothing from the ships. He hopes to see battle soon but complains of bad winter weather. Colonel Gantt has been sleeping in a house as the men prepare winter quarters.

Young William Rector, was the son of Arkansas's Governor, Henry Massie Rector. He was born in Little Rock on March 4, 1842, and served as the 1st Lieutenant of the 30th and 39th Arkansas Infantries during the war. He died from his wounds at the Battle of Helena, on July 4, 1863.

[Page 1] Columbus, K. Y.
Dec 2nd, 1861
Dear Pa
as I am now in a very
pleasant room I will endevor to write you
a short letter though I think it will be
very dificult [sic] to make it atall [sic] interesting as
it is so dull now at this place there is no
excitement atal [sic] nor but very little prospect
for a fight I think but Gen Pillow seams [sic]
to anticipate an attack on this place. News
came to night [sic] that Mr Jeff Thompson
had burned another large steamer for the
Yankie's I dont have any idea how he does
it but he goes up between here and Cairo
and catches the boats as they are going up
and burns them up this is the second one
he has burned very recently I believe the first
he burnt that he got a good deal of clothing and
blankets for his me [sic] off of her. I wish they would
send their gunboats down now I should
like to see the engagement between them
and ours we have four gunboats and a steamer
ship here now The ship carries nine or
ten very large peaces [sic] of cannon the gun boats [Page 2] have each two or three peaces [sic] of ordnanc
The old man is very anciously [sic] looked for
every day but I think it very uncertain
about her getting up for there is only
10 feet water on the shoals at New Madrid
and I think that she draws about fourteen
feet I should like to give you a description
of the boat but dont think that I could
do it as I have never seen them only
at a distance but I can say that they
have a hul just shaped like any other
boat but much sharper and narrow at
the bow and I think are lined with sheat protected and the machenary is exposed
allsoe [sic] but the ship I cant see what it is
that makes her go long for I dont see any
wheel she is just like a skiff has no
cabbon atall [sic] you cant see any thing but
the mast poles and chimney. Four of our
boats went up the river the other day to
try and draw out their boats but without
any success toward it I dont know how
far up they went. Pa we have five
southern Arkansas regiments here and
the officers of all of them are very
ancious [sic] to have them farmed into a
brigade some of the Generals have say to
[Page 3] ought to be done and others object to it
I think Gen Polk objected to it in the
first place and then he got in the notion
of it and Gen Gid J Pillow who said
at first that south Arkansas had so many
troops in the field and no Generals that
it ought to be did and now think it ought
to be delayed for some time yet. If it is
done Col Gantt will stand a very good
chance to be promoted he wants you to
write on to Ritchmond [sic] and try and
have it done he said that he intended excuse this letter for I am siting in a smoaky [sic]
room and have the head ache my health
is very good indeed this is the first time that
I have been atall [sic] indisposed for two months
I way [sic] 155 lbs now. Bill is sick to day
has a bad cold and comflaining pain
in his crest I am affraid that he is going
to have pneumonia but hope not I have
him in the hospital he has been staying
in a house for a week or two with Col Gantt
The weather has been very bad for the last week
raining sleeting and snowing the ground
is now covered with snow I havent slept in
a house since I have been up here the
Col got a room and wanted me to
[Page 4] stay in it with him but I prefer a tent
untill [sic] we take up winter Quarters for I might
go and sleep in a house for two or three days
or perhaps two weeks and then have to go in
tents it would give me cold and I sleep very
warm in my tent. The Parson of the regiment is
siting by me and sends you his very kindest
regards we have all been very much disappointed
about your not comeing [sic] for I told them you
would be here and have been looking for you
every day for the last week if you dont come
I wish you would send me some money before
cristmas [sic] comes send it to ms gindie and I will
get it write soon To you affectionate son
William 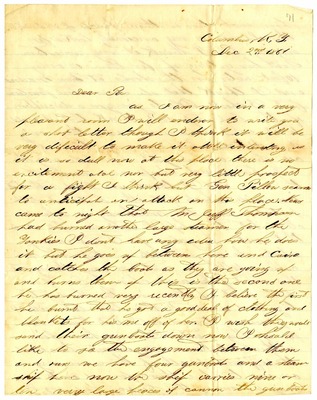