Williams informs Fletcher of the number of cattle and hogs Fletcher lost in the recent flood and writes that Fletcher's neighbor, Mr. Pickett, is using all of Fletcher's tools and provisions as though they were his own. Williams told Pickett that he must make an account of what he took or used if he felt compelled to use Fletcher's property. Also, Williams tells Fletcher that he met two Union deserters the day before.

John W. Williams was born in Tennessee in 1821. He moved to Mississippi County, Arkansas, in 1849, and married Anna Fletcher, the daughter of Elliot H. Fletcher. His occupation was as a farmer. Elliot H. Fletcher, Sr., was born in Charlottesville, Virginia, in 1805, the son of Thomas Clark and Susan Jouette Fletcher. He received training as a merchant and lawyer in Tennessee and went to Arkansas about 1836 to take a position with the new Real Estate Bank. In 1840, he moved to Mississippi County and settled on Mill Bayou where he built a large and prosperous plantation. In 1848 he was elected to the state House of Representatives from his county. He served in that position until 1852. At the beginning of the Civil War he raised and equipped the Fletcher Rifles. The unit was commanded by his elder son, Elliot H. Fletcher, Jr., and his other son, Thomas Fletcher, became a sergeant in the company. The Fletcher Rifles became a part of the 2nd Regiment of Arkansas Volunteers, and later Company C of the 18th Regiment of Arkansas Volunteers. Both of Fletcher's sons were killed at the Battle of Shiloh in April of 1862.

[Page 1] Home June 6th 1862
Col Fletcher
Dear Sir With an indifferent
pen and on a defaced half sheet I send you
a few lines Mr Witherspoon thinks of going to
Jackson by way of Brownsville Tomorrow morn -
ing and says he will carry a letter to you.
I was at your house Today. All were well.
I wrote you before, stating you had lost many
cattle during the overflow. Since then many
of your hogs have died. You have a suffici -
ency of milk cows left. Probably near twenty
cattle in all died. Your hogs look well, but
less than fifty, in all, were left from cholera.
I have not more than thirty five hogs left
and I lost a dozen cattle. The losses on
the river here been great and general.
The worms had destroyed the first cut of
corn you had planted and it is necessary
to plow up and replant. Another cut of corn
was been just planted in well prepared ground
I hope The worms will not cut it.
When you left you held such language to Mr -
Richett as to induced him to believe he had
the power to manage your farm, and to use
everything on it as if it was his own, and to
use it for his benefit. I told him today you
had [ ] me controll over your affairs [Page 2] and he must superintend [sic] and look to your
interest as his discretion dictated. He thought
he had the right to use your bacon. I told him
if he should be compelled to do so to make
an account of what he used. His wife thought
she had a right to Mrs Fletchers store room, as a
key was left her that would unlock the door.
To be short, I told him any person stopping
at your house because it was yours must be
entertained at your expense, but anything
be appropriated to himself must be accou -
ted for. He said you had promised to write
to him if you staid [sic] more than two weeks
I expect P. will do as well as any other man
under the same circumstances.
Fort Pillow, to my surprise was evacuated
night before last. The evacuation was complete.
I am of the inpression that it was a stroke
of policy. Whether it will result to our ad -
vantage, Time only can determine.
Occassionlelly [sic] we have obtained a paper from
The north and likewise from Memphis. My
impression is from all I see, unless the South has
fewer men and less amunition [sic] and provisi -
ons then I infer we will still have a long
bloody war. I saw two northern deserters yesterday
They said there is much jaring in their own army
between the negro stealers and the union saviors -
They said They were of the latter and the former were
in the asendency Therefore They left. Truly, J W Williams 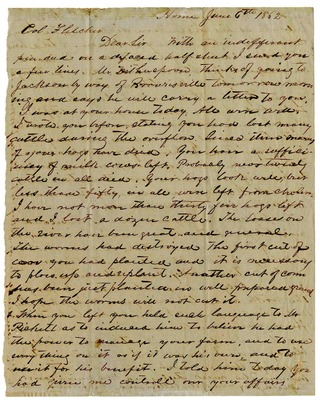