Woodruff writes that his regiment recently left Island No. 10 and at the time of their departure toward Memphis, Union gunboats were firing on Confederate "battries." He apologizes for the state of the letter and his handwriting, as he was writing while on the train.

[Page 1] Marc 20th, 1862
Grand Junction Tenn
My Dear Mother
I am now on my way
to corinth Miss we left Island No 10 the 18 of
Mar and arived [sic] at Fort Pillow the next morning
and we laid over there untill last night we then
was ordered on the boat to Memphis. Ma I would
of written to you before now but when I got to camps
we were ordered to New Madrid after we got there our
company had to go on picket and about 3 oclock [sic] that
night we were drove in by the enemy as we supposed
but it was not so I was acting as capt of the guard
and my instructions was if more than one gun
fired that we must run in and report to head
quarters of the guard. the company below ours
on guard one of there men fired a gun and that caused
the whole guard to fire and just about that
time you ought to of seen me climbing
over the fences and threw the mud getting to the
company when we got there we had to go back to
our posts I tell you I felt verry [sic] shimh [sic] about
that time but we stood our time out without another
allarm [sic] we supposed that the man that fired his gun
was only scared or tired of standing guard and wanted
to go to his company and that was the only way
of getting there. the day we left Island 10.
10 of the enemies gun boats came down and [Page 2] three of them made an attack on one of our
battries [sic] and was firing into it when we left
and hadent [sic] silenced it when it had but two
guns in opperation. I received a letter from John
yesterday by Tom Ramsey which he stated in his
letter that he was about to be off in a cavelry
company Tell him I would of answered it as soon as I
got his but I was under marching orders and that I
had no way of writing well we are about to be off and I
cant [sic] write any more just as soon as we get to our
stopping place I will write again. good by [sic] nothing
more from your affectionate son
W. H. Woodruff
[ ] this badly written and worst letter
as I had to take my chance to write and I am on the
cars and you know that it is a bad place to write give
my love to all 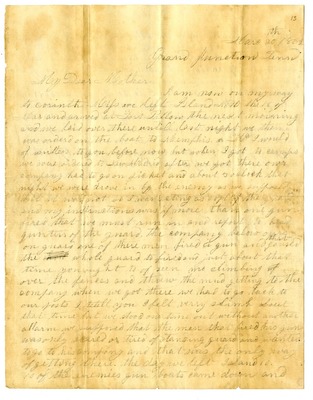