In this correspondence, several men petition Governor Rector to release some Searcy County men arrested as jayhawkers. It was stated that the men joined a peace society and are not jayhawkers. The letter goes on to address that very respectable members of the community were in this fraternity as well, and that they meant no harm to the Confederacy.

During the Civil War, many societies were formed in secret to oppose the Confederacy. If one was caught to be in an anti-Confederacy society in Arkansas, they could be sentenced to death. Therefore, trials were very serious in these matters.

[Page 1] Head Quarters Battalion
Arkansas Cavalry Volunteers
Camp Culloden
Carroll Co Arks Decr. 6th. 1861
To the Governor, Military Board
and Judicial tribunals of the
State of Arkansas, s e,
Whenas this day John Christey and
his two sons Joseph C. Christey, J. F. H. Christey and P M Hensley
Gilmore Smith and D. C. Baker Citizens of Searcy County
Arkansas voluntarily came [and] appeard [sic] before honble [sic] Kelly
Featherston and William Owens associate justices sitting as a court
of enquiery [and] investigation in certain scent [sic] Treasonable and
Insurrectionary movements believed to exist and formed into societies
under various appellations held together by oaths sign tokens
[and] pass words and made known to said court
the existence of a society represented to them as a Peace society
Peace organizations being a good thing and for the protection of
their homes property [and] family against Robbers [and] theives and that
it was a neighborhood society and that the best men [and] oldest
citizens of the county were members of it and by which representation
they were induced to go into the same and took the oath as members in
and whenas from their testimony given before this court
and which your attention is particularly invited to, We
are freely satisfied that these men were gulled [and] dec -
= eived into the same by false representations
We would
most respectfully, petition the Executive of the State for
their release from confinement and that they may be
used if necessary for witnesses on behalf of the State
as to what they may know, that we believe them honest
Respectable and unsuspecting men who have without design
or intention of wrong to tHe State or Confederate States been [Page 2] induced by intriguing [and] designing men to become members
of a society which they now believe had an evil design in it
though so far as they were capable of judging on the time they
were not capable of discovering although the said John Christy
Joseph C. Christy, J, I, H Christy and Gilmore Smith said
from this evidence which was taken seperate [and] apart from
each other [and] voluntarily given that they did not like the
scent [sic] signs token in and while the oath
and sign were being given them and objected to that part
at the time of and that we are satisfied from the manner
in which they came before the court and testified that
they were anxious to point out the wrong [and] evil if there
was one in it -
"We would therefore humbly pray the
Release of their men and all others testifying alike upon
pledges of fidelity [and] support of the South being given, )
we are assured in these case if exacted will be cheerfully
complied with
signed William
We the undersigned cheerfully join in the recommendation for
the release of the parties above named and all others testifying
voluntarily [and] making comfessions as done by these paries [and] upon
pleges of Fidelity [and] support to the State of Arkansas [and] The Confederate
States of America = Signed
Israel Burns, / C C Robertson
James C Jameson / S. H. Elbritton
J. A Hicks / L J Hendrix [Page 3] Petition to the M. B.
for release of certain persons
belonging to "Jahawkers" [sic]
Subcribed names.
J D Hilborn
Wm. P. Hilburn
Thomas Baker
Jacob Cumming
James Hambleton
A. J. Cole
G. L. Hendrix
P. A. Hendrix
L. G. Slay
G Th. L Rea
H. Hendrix
S. W. Ruff
Wm. Wyatt
H.M. Truitt
F. W. Robertson
John Silivant
J G Hendrix
W. F. Miles
Amerson Robertson
Joseph Stephenson
Nathan Slay
John. M. Hensley
John Jameson
James D. Robertson
J. H. Hendrix [Page 4] Bilieving [sic] that the men here mentioned having been deceived
and gulled into this society and from the testimony before us and from other
circumstances of the standing heretofore held by them in community, we join in
the application for the release of the persons herein named, as all others who have voluntarily
exposed their connection with it, as well as many others who have been arrested equally innocent =
Kelly Featherston J.P.
William Owens J P
Jno R A Scott Capt C. S. A 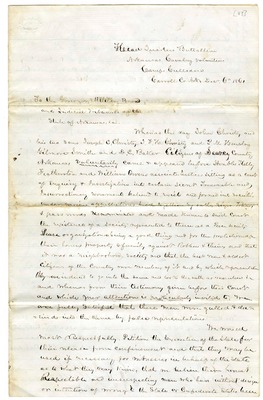