In his letter to his father, Fletcher writes that the First Arkansas Battalion under General Hardee arrived at camp a week ago and are constantly drilling to prepare for battle. He goes on to explain the current life of his camp, the people in camp, and what his days entail.

[Page 1] Camp Buckner, near Bowling Green Ky.
October 20th 1861
My Dear Father
The 1st Ark. Battalion (as it is now
called ) arrived at this beautiful town just one
week ago. We found Genl Hardee here. The 2nd
Regt. in command of Quinlan had made no stay
here, but proceeded on to Cave City, ten miles this
side of Green River. Genl H. went up that
evening to Cave City and tried to take Lieut Col
Marmaduke with him but he continued to be
excused through the intervention of some of the
Battalion officers. So the Col., after our getting
into a comfortable camp, commenced drilling us
and preparing us for the active duties of soldiers in
the field. Three days after the Genl left a dispatch
came from him to Col Marmaduke, and he went
immediately, taking nobody but Robt C. Newton and
Dr. Coates. Of course every one was on the "qui vive"
to know what was up. We were told by knowing
ones that a fight was certain provided the enemy
would make a stand. They were reported to be in
considerable force ten miles north of Green River.
Genl H. also ordered up a detachment of Sharp's
Artillery - Well the Col has just returned and
reports the expedition a failure, because the enemy
[Page 2] wouldn't show fight. Col M. led the 2nd Regt. Our
forces advanced about 1200 strong as far as Green
River and up the River 15 or 20 miles. but the Hes -
sians under Rosseau could not stand before the
Arkansaw boys and beat a very hasty retreat -
They say that the 2nd Regt. displayed remarka-
ble coolness and determination - in fact started on the
march with enthusiasm. their conduct was such
as to elicit from Genl Hardee a high compliment.
He said that henceforward he wanted no higher honor
than to lead the Arks. troops. They all returned to
Cave City, about 30 miles north of this place
where Genl H. as commander of the advanced post
makes his head quarters. Col M reports today
that everything is quiet above - that we may be
ordered forward in a few days, but he knows nothing
about the matter - Patterson, Cross, and Shaver are
here. Lyon, the 2nd Arks, and Major Feifer's cavalry
also a battery of Sharps are all at Cave City.
Major Pope is here - he has paid off the officers
up to the 1st Oct - He commenced paying the com-
panies, and paid two, not mine however, when he
received a dispatch from Genl H. not to pay the men
until Capt Govan could be seen, so that some
stoppages of his could be taken out of their pay -
But Company "O" got a little money anyhow.
I handed over the balance of their commutation
money, and they are now tolerably flush -
[Page 3] We have some sickness, but everybody's health
seems to have improved since leaving Columbus. My
health is finally restored. I weigh 185.
I found Capts Johnson and Crump already here,
with a negro boy apiece - We have our mess, con-
sisting of Robt C. Newton, Capts Crump and Johnson
and myself, in full blast. I shall not discribe our
fare for fear you might think we attached too
much importance to eating.
By the way speaking of Johnson, a commission
came for him the other day as Major and one for Marmaduke as
Leiut Col. of the Batt. and he (Johnson) declined, rec-
ommending at the same time Bob Newton in his place
He declined upon this ground - that Newton had
been appointed to the Majorship, and Genl H.
refused to instate him; and that he did not want to
do anything that would injure the interest a young
man of merit - Newton will no doubt be appointed.
I am improving rapidly in Battalion drill.
two weeks more under Col Marmaduke will be all
I want.
I had the honor of a presentation to Genl Buckner
the other day. he visited our camp. He is a distin -
guished looking man on horseback, looks to be
about 48 or 50 years old.
The Genl. Hospital here is a place worthy of
the name of Hospital. It is visited by many
ladies for the purpose of nursing the sick and [Page 4] there are several who have attached themselves to the
institution.
Efforts are being made to secure for us Enfield
Rifles which are now in Nashville - I hope we will suc-
ceed, and think we will.
There is a considerable amount of clothing arriving
from Arks. and other sources for Hardee's Brigade. I
will endeavor to get all I can.
Scott talks of trying to get a furlough to visit
his home. I doubt if he succeeds in getting it.
I think I shall dash down to Nashville shortly
(only 4 hours run) and have a good uniform made -
I begin to think now that we will winter in
Louisville - The enemy is scard [sic] already - and we have
a stronger force than they give us credit for.
The Arks troops are poorly clad and badly
equipped but are far better soldiers than any here -
to show which the advance posts are under their
charge. Cleburne has not yet arrived. We look
for himdaily, also Brig. Genl Hindman.
I like my mess-mates more and more
every day. they are all gentleman.
How would you like to come up here.
there is not the bustle here quite that you saw
in Columbus. Some member of the family should
write weekly. Direct your letters to this place
Taking care to express that the Battalion belongs To
Hardee's Brigade - My Love to Sister Anna and all
the family. Remember me kindly to my friends.
sincerely
your son
Elliot H. Fletcher Jr [Page 5] [ ] 10
Col Elliot H. Fletcher
Osceola
Mississippi County
Arkansas
Via
Memphis Tenn 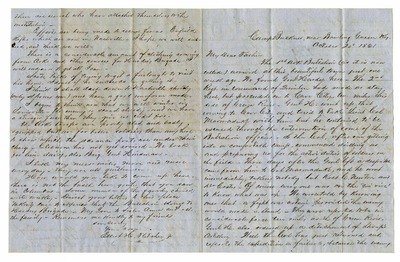