In his letter to his wife, Flanagin describes his hope for peace by the next winter, and describes the plentiful provisions his regiment has enjoyed since he enlisted. Flanagin also observes the discrepancies in treatment of Union prisoners by soldiers of differing states.

[Page 1] Marionville August 24th 1861
Dear wife
No news since the battle. I
have always thought that we would
be at peace next winter.
I got your letters of July 19th
aug 3rd aug 4th and aug 10th
reached here today also
[ ] of aug 6th.
The weather is pleasant.
nights cool. Our company have
food plenty of flour and bacon
Since we left home except
one night when our waggons
were behind we had some
of our own when we went
into service. We have had plenty
of coffee and never been
out of Sugar except one night
two nights we had a cold rain [Page 2] which was unpleasant, In short
thus for we have had more
comforts than I expected when
I left home.
We have at one hospital 3
wounded men and 2 nurses and
at another 7 wounded and sick
men and two nurses, with a
doctor - a good many of our
men are complaining. We
are here to recruit our
horses and ourselves.
Unless there is a union
force in the country we
do not expect to leave here
for two days or two weeks.
we do not suppose there
is any armed enemies
within fifty miles of camp,
McCulloch forces are
scattered over a large district
not expecting to meet ou[r][Page 3] enemy shortly.
We have about 600 men here.
There is about 800 at Mt Vernon
12 miles west and some 1300
at Little york 15 miles north.
I have been in Springfield
twice - a good many men
are from [ ]. There are
hundreds of wounded men
there belonging to both sides.
I suppose there is almost
500 wounded men there.
The Churches academies
Court house and some 30
or 40 houses used as
hospitals.
I do not see many woman.
I suppose not 20 in Springield.
The women stay in their houses..
Mostly.
We treat union men much
better than the Missourians do.[Page 4] I shall write again next
Sunday we have preaching
tomorrow
[ ]
H. Flanagin 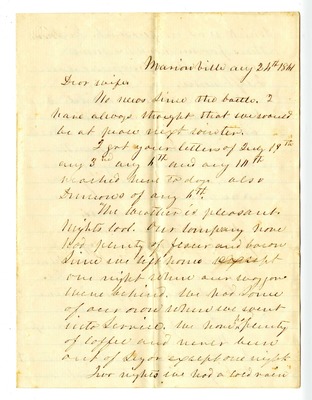