Harris Flanagin, "Army of the West," to Duncan Flanagin

In his letter, Flanagin provides details of the army's march from Arkansas to Mississippi. He goes on to ensure his son that his health is fine, and advises his son to keep up with his studies and stay physically active.

[Page 1] Army of the west
June 2nd 1862.
Master Division Flanagin.
Dear Son.
On Apl 16th we left Duvalls
Bluff on White River on the Steamboat
Republic and went down White River
and up the Missisipi [sic] to Memphis and
got to Memphis on the 18th.
We camped at Memphis
and stayed there until the 23rd. and then
started to Corinth in Tishomingo county
in Missisipi [sic]. We camped on the
East side and on the 3rd of May we went
to Corinth expecting a battle and then
went back.
On the 5th of May we moved to a
Camp 3 miles southEast [sic] of Corinth.
We moved forward several times
expecting an engagment but have had
none. We have now fallen back near
to Ballardville in Itawamba county in
the state of Missisipi [sic]
you can tell where we are by looking [Page 2] on the large map of the united states.
My health is tolerably good.
I am in hopes that you and nash
will attend to your lessons and learn
all your law so that you [ ] of high
standing.
I wish also that you would take
a good deal of exercise so that you
may strong and be healthy.
Pay attention to one thing at a
time. When you study think of your
lesson and nothing Else. When you
play enjoy yourself as much as you
can your father
H Flanagin. 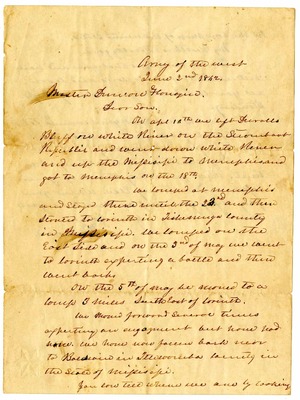