In his letter, Schmidt gives Woodruff details of his journey east from Little Rock. He discusses naval activity on the Mississippi River as well as how he had to sell part of his belongings to a man with whom he was traveling.

Henry D. Schmidt was born in Marburg, Prussia, in 1823. He entered the medical field, and came to America in 1848. He served as the demonstrator of anatomy in the New Orleans School of Medicine. During the Civil War, Schmidt served as a Confederate Surgeon. He returned to New Orleans following the war, and served as pathologist of the Charity Hospital there for twenty years. He died at his home in 1888.

[Page 1] (Rec'd, 2 July, )
Prentiss Miss. June, 25. 1862.
9 1/4 o'Clock P.M.
Mr Wm E. Woodruff
Dear Sir,
I have safely
arrived on this side of the Mississip -
pi river. Shortly after sunset, I ar -
rived in company of Mr Read, May -
or of Pine Bluff, at Napoleon. We
proceeded at once to the landing,
where we still found the little
steam ferry. Half an hour after -
wards we had steam ago and
soon reached the shore north our
horses. Mr Read joined me this mor -
ning at Red Fork. He left Pine
Bluff the same day as I did but
later in the day. Having learned that
I left that place in the morning until he reached last night South - [Page 2] Bend where I had stopped for dinner
with Mr Fletcher. Learning that I
intended to stay over night at Red
Fork, he sent me a telegraphic
dispatch to wait for him this mor -
ning, when he came up to me. He
has a son in Beauregard's army
whom he is going to see. The mor -
ning when I left Dr. Watkins , I
found that the load on the back
of my horse was too much, I sold
a portion of my baggage (umbrella included) to a
man who travelled with me for a
few miles. Where I stopped for
dinner I sold an other [sic] portion
with the satchel to mine host and
thus got rid of that whole load
on the back of the horse. However
I put in its place my blanket
and Indian Rubber coat. At
South Bend, I discovered that the
place where the load had res -
ted had become swollen and drops - [Page 3] sical. I again rearranged my baggage
so as to have this portion of the back
entirely free. Though it is not entire -
ly well, it is not worse, but rather
better, and I think that now in a
few days it will be well again. In
all other respects the horse has been
doing very well. He is a fine fellow,
and every body remarks it; I am
glad to have him safely on this side
of the river and would not like to
part from him. The yankees have
never been at Napoleon but last
Sunday 5 Gunboats and Transports
have passed by on their way down
the river. As a portion of the road
leading from Napoleon up the river
is blockaded we had to travel through
the swamps to day for many miles.
Give my best respects to your whole
family. also to Mr Matthews [and]
Mr Folson and my Assistants at
the Hospital, and to any body who [Page 4] asks for me. If I should
get a chance you shall hear from
me again. Allow me to thank
you once more for the kindness
you and your family have evinced
towards me. It would afford
me great pleasure if I should
ever be able to return it.
Farewell!
I am sincerly yours
H. D. Schmidt
P.S. - Please excuse my scribbling.
Dr. Henry D. Schmidt,
Prentiss Miss,
25 June, 1862. 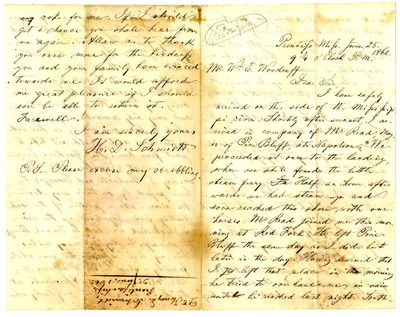