In this addition of Harper's Weekly, two Union officers, Brigadier General George F. Shipley and Major General Lewis Wallace, are shown in large sketched portraits. Below is a depiction of the "Battle at St. Charles, White River, Arkansas-Explosion of the 'Mound City,'" which shows the battle fought between Confederate batteries and Union gunboats on June 17, 1862. The U.S.S. Mound City's steam drum was struck with an artillery shell during the battle and exploded, killing or severely injuring about 150 of the 175 crew members. 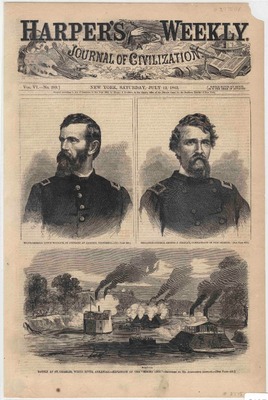