In this letter to his wife, Loughborough writes of his disappointment in missing the "glory" of battle at Pea Ridge, having returned to the army in time to "share in all the hardships of the retreat." He includes an account of the battle which he learned from the participants, though the accounts of the retreating Confederate troops are not entirely historically accurate.

James M. Loughborough was born in Kentucky in 1832 and married Mary Webster in 1859 in St. Louis, Missouri. He was a lawyer by profession, and was a Lieutenant Colonel with the Missouri State Guard, and during different times during the war served as his division's Paymaster-General and Acting Assistant Adjutant-General.

[Page 1] Van Buren Ark M'ch 18. 1862.
My Dearest Wife:
The Telegraphic dispatch which
I sent you from Boston Mountain via Clarksville
relieved your mind of apprehensions as to my
safety in the late battle: -
Gen'l Steen having been taken sick at Little Rock I was
sent across the County with letters to Gen'l Price, and
thus reached the army a day or two after the battle, and
just in time to share in all the hardships of the retreat
without any of the glory of the fight. I served with Col
Little, who brought up the rear of the army with his Brigade.
We were exposed to severe rains, without tents, and frequently
with nothing to eat. We are in at last and I embrace this
the first opportunity to write to you. I have had many conversations
with those in the fight: and have succeded in gaining a very
good idea of it: Our army by a forced march suceeded in
surprising the enemy completely. Gen'l Price with the Missourians
went around them and cut off their retreat, while Genl's
Van Dorn [and] McCulloch with the Southern troops attacked
from this side. At the end of the first day we had
driven them from every postion; had captured their baggage [Page 2] and occupied the fields that night. Everyone thought
the enemy whipped. at early dawn the fight recommenced
and raged with great fury on both sides: Gen'l Price trying
to capture their whole force, and the enemy trying to cut
through so as to escape; we were still victors , when the
Confederate troops fell into confusion from the death of
McCulloch and McIntosh, and no persuasion could rally
them: Gen'l Van Dorn apprised Gen'l Price that he could
not support him, and a retreat was ordered. Col Little
protected the retreat with his Brigade, and won high
praise from every one for his gallantry, and Soldierly
bearing. Had the enemy pursued our force would doubtless
have been cut all to pieces; as it is, our loss is very
small: not over 100 killed and about 210 seriously
wounded: The enemy's loss was much greater, but numbers not
not known. We have captured several hundred prisoners,
a number of pieces of artillery, and quite a lot of Baggage
wagons, and lost nothing. There is quite a prejudice
against Van Dorn, but it is without foundation. He is a
fine soldier and a brave man - He will reorganize, recuperate
and be ready for them again.
Our Division is in much confusion and all of us are kept
very busy: - It is likely that the "State Guard" will be
disbanded: if it is, I will be free as soon as the money
arrives and I pay off the troops what I shall then do,
will depend upon circumstances - I will endeavor to get
a quarter master's appointment in the Confederate service. [Page 3] or if that fail I'll try something else.
I have quite a number of incidents of the battle to relate
but must defer them until I have more leisure. My tent
is now crowded with men on business. None of our
friends were hurt except Charlie Perry, who was shot
through the face. His wound is probably mortal.
Wright Schaumberg, and Frank Van Phil behaved with
great gallantry.
I must now stop my Darling and go to work: Write to
me Care Scott [and] Pennywit at Van Buren: Kiss our
little one a thousand times. oh wife what a void there
is in my heart when I think of the messages I used to
write. God grant that we may be spared other such
afflictions!
Give my best love to all the friends and tell them
that we are not whipped yet.
Good Bye:
Your Husband 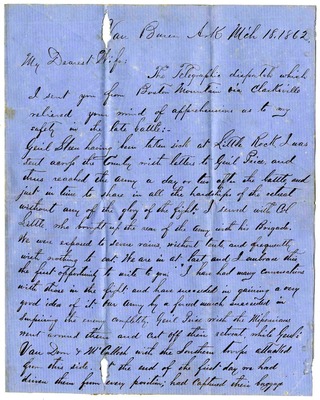