The church's minutes include a "tribute of respect" for Joseph L. Neal, church member and Confederate soldier, who was mortally wounded at the Battle of Oak Hills (Wilson's Creek) "while leading his battalion." A copy of the tribute is to be given to his mother.

The Battle of Wilson's Creek, also known as the Battle of Oak Hills, was one of the first battles west of the Mississippi during the early days of the Civil War, and included many soldiers from Arkansas. 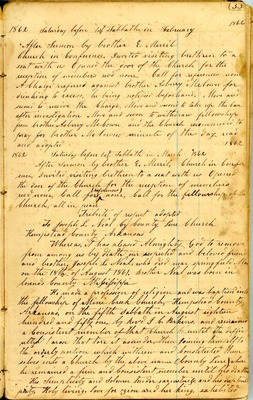