James H. May is appointed lieutenant colonel of the Fourth Arkansas Regiment in the Confederate Army by president Jefferson Davis. The commission is signed by Confederate Secretary of War James A. Seddon. Should he choose to accept the position, May is to report to Colonel Bunn.

Much like the president of the United States, President Jefferson Davis of the Confederacy was the Commander in Chief of the Confederate army. Therefore, it was by his order that military officers were appointed, through the War Department. 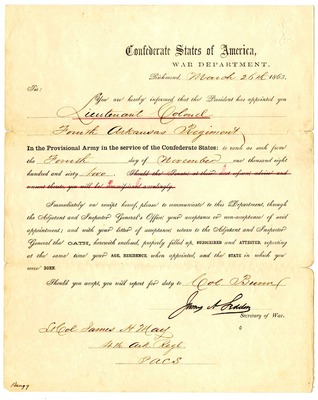