This is the official appointment of William H. Halliburton as the chief tax collector for Arkansas by Confederate President Jefferson Davis and authorized to collect a war tax. Confederate president, Jefferson Davis, affixed his name to the document, as well as Confederate Secretary of State, Robert Hunter.

William H. Halliburton, born in Tennessee, moved to Arkansas is 1845, settling near the town of DeWitt in Arkansas County. He was a teacher, and also practiced law, served as county sheriff's deputy, and acted as the county clerk and tax collector. He was appointed the state's war tax collector during the Civil War, and resumed his private legal practice in DeWitt following the war. Halliburton was elected to three terms in the state legislature, and was a devote supporter of literacy and education until his death in 1912.

Jefferson Davis,
President of the Confederate States of America,
To All Who Shall See These Presents, Greeting:
Know ye, That, reposing special trust and confidence in the Integrity, Ability, and Punctuality of Wm H. Halliburton
I Do Appoint him Chief Collector for the State of Arkansas, under the Act of Congress to authorise [sic] the
a War Tax for their redemption, and do authorize and empower him to execute and fulfil the duties of that Office, according to
Law; And To Have And To Hold the said Office, with all the powers, privileges, and emoluments to the same of right appertaining
unto him, the said Wm. H. Halliburton until the expiration of this Provisional Government.
In testimony whereof, I have caused these Letters to made Patent, and the Seal of the Confederate
States to be hereunto affixed.
Given under my hand, at the City of Richmond, this 23d day of
September in the year of our Lord, one thousand eight hundred and sixty one
By The President: Jefferson Davis
[RMT] Hunter
Secretary of State 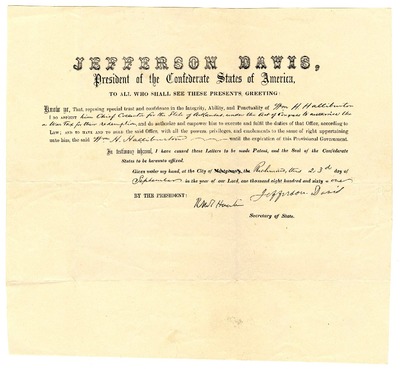