This circular issued by Major General Thomas Hindman asks citizens, particularly the 'patriotic women of North-West Arkansas' to contribute blankets and carpets to the army. Hindman expresses regret for the need to ask this of the citizens, though feels that it is necessary.

Prior to the start of the Civil War, Major-General Thomas Hindman was a United States Representative for the 1st District of Arkansas. His term in Congress ended on March 4th, 1861, the same day President Lincoln began his first term. He quickly joined the Confederate service soon after the war commenced. After the war concluded, Hindman sought a pardon from President Johnson, but was rejected. In late 1868, three years after the conclusion of the war, Hindman was assassinated in his home. 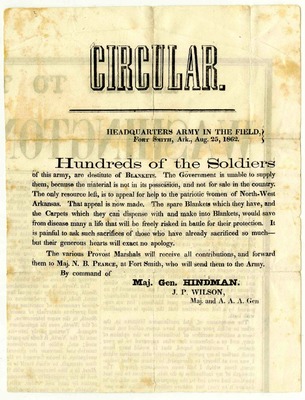