Holbrooks complains that the men in his militia company are not attending drill faithfully. He explains to the governor that this is due to him not receiving his commission yet. He asks if the commission is necessary or not to wield authority over the company.

During the Civil War, many military companies elected their own officers. In this specific case, Holbrook was elected Captain of his company. However, he had not yet received his commission making the rank official. This leaves the authority of his rank in question, and ultimately led him to write the governor.

Ultima Thule Arks
Febry 13 1862
Hon H. M. Rector
Sir;
I have attempted ever since
early last fall to organize and drill the
militia of my township - but in many instances
they have refused to appear at my appointed drill
hours and I can not compell them as I
have never received my commission as Captain
After my organization I made my report to
Col Dawson who was then our militia Colonel
whether the report of our election has ever
been sent up or not I cannot tell - The men
will not attend muster unless I am authorized to
make them and I ask your opinion as
Commander-in-chief of our state whether
I have the authority to make them attend not
having yet been commissioned.
On the 8th of this month I have an
election for 1st Lieutenant and Saml Finley
was elected and I hope he with the other
officers of my comapny will be commissioned
Respectfully
your Srvt
Burton I Halbrooks 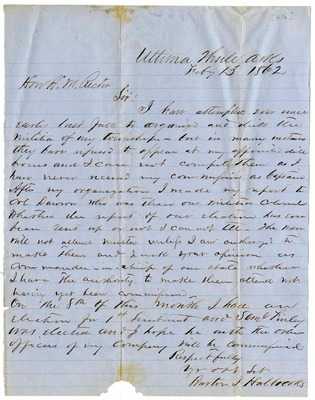