Drawing, "The War in Arkansas - Brigadier-General Asboth and Staff, at the Battle of Pea Ridge, Arkansas." Brigadier General Alexander Asboth, a former Hungarian soldier, joined the Union Army at the beginning of the war. Asboth is shown in the drawing with his setter, York, who was said to often accompany his master during battle.

Featured in this drawing is U.S. Brigadier General Alexander Asboth. Born in Hungary, he was trained in the Hungary military academy and served in the Hungarian Army before immigrating to the United States in 1851. He commanded a division under John C. Fremont and Samuel Curtis, occupied both Bentonville and Fayetteville during the Arkansas campaign, and participated in the Battle of Pea Ridge. In 1866, President Andrew Johnson nominated him for the award of brevet grade Major General for his conduct during the war. 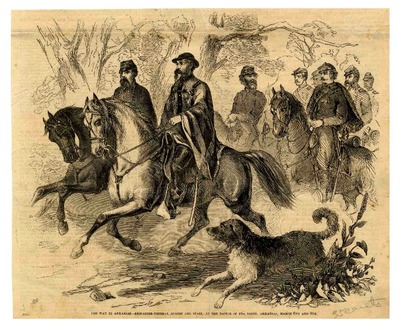