In his letter, Foster writes that there are many people of Montgomery, Pope, and Polk counties were heavily in favor of the Union, and named a number of them. These men would not fight for the Confederacy unless conscripted and made up a sham company to fool Confederate recruiters into thinking they had already enlisted.

Though Arkansas was one of the states that seceded from the Union upon the onset of the Civil War, a number of its citizens still held their loyalties to the United States. This created much tension between neighbors whose views did not align. Some Confederacy-supporting citizens went so far as to report their neighbors to Governor Henry Rector, who acted to quash disloyalty to the Confederacy.

[Page 1] Oct the 14
Ark Montgomry Co 61
Mr Henry M rector [sic]
govener [sic] of the State Dere Sir I am sorrow
To inform you abe lincoln has so
many friends here as he has in pike
[and] Polke Co [and] this [and] Pike they saye [sic] the popel has
give them no showing gone out of Union one this
heades [sic] they would note gone oute [and] has not
for they stick to union yete [and] one of the
Croude [sic] has hallow huraw for lincoln [and] has
all the commitey union men [and] dars [sic] any -
body to tech [sic] one of or any commitey [and] grate [sic]
young men [and] says they dont intend to go
to fite till they are drafted [and] if they get
tuck [sic] prisoners they will tell north they
would note of faught agante [sic] them they
was compelde [sic] to do so [and] the north will be
good to them now I will gave [sic] you as many
of thir nams as I can recolect [sic] David White
juner [sic] david white seinior [sic] henry White Wm White
Wm White White senior Jackson White [Page 2] Scott Forester mass groves Barney Dawes
James kirk The way to find all of them
out go to havey walker W C Walker [and]
Thomas Ellison [and] F r Forester [and] inquire ner [sic]
their neighborhoods the most of them lives
in wat [sic] they call greesey cove in pike
[and] Polk Co I am your most respeck
fully [sic] Wm H Foster
P S, they hade [sic] a Sam Company maded
up of 25
when they was beeten [sic] for up volunteers this
sham company was to stay at home when
the secrte [sic] slip [sic] out one I had for go
saye boys come on you shante have to
go off to fite [sic] foyen [sic] alls [sic] we will stay
rite [sic] here his nam [sic] was Jach Putnam
[and] Eljah putnam Witout [sic] they have
Turn [sic] Since I lefte [sic] ther [sic] the 2 of instant I was
down in contry [sic] then 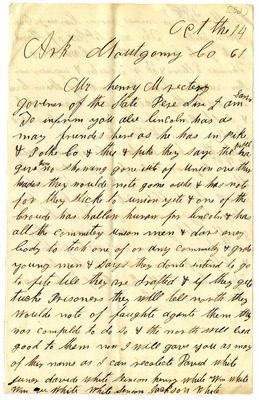