In this letter to his mother, Elliot H. Fletcher's regiment finally pitched camp after a long march, but he was uncertain as to how long they would remain there. He writes that numerous regiments were "being moved at a rapid rate." He does not yet know his destination. On the back of the document, Elliot Fletcher Sr., mentions his son's safety, and his own health.

Elliot H. Fletcher, Sr., was born in Charlottesville, Virginia, in 1805, the son of Thomas Clark and Susan Jouette Fletcher. He received training as a merchant and lawyer in Tennessee and went to Arkansas about 1836 to take a position with the new Real Estate Bank. In 1840 he moved to Mississippi County and settled on Mill Bayou where he built a large and prosperous plantation. In 1848 he was elected to the state House of Representatives from his county. He served in that position until 1852. At the beginning of the Civil War he raised and equipped the Fletcher Rifles. The unit was commanded by his elder son, Elliot H. Fletcher, Jr., and his other son, Thomas Fletcher, became a sergeant in the company. The Fletcher Rifles became a part of the 2nd Regiment of Arkansas Volunteers, and later Company C of the 18th Regiment of Arkansas Volunteers. Both of Fletcher's sons were killed at the Battle of Shiloh in April of 1862.

[Page 1] In Camp, 3 miles below Pt. Pleasant
Sept 30th, 1861
My Dear Mother
The smoke of the Kentucky
is in sight above the trees across the country
above and I hasten to aquaint you with
the fact of our safe arrival here at "Civilization"
after a tedious march through the most
wilderness country that my eyes ever beheld -
I say safe, but we had the misfortune to lose
one of our men last night - Columbus Patterson -
he died of a congestive chill at a late hour
last night after much suffering - His death has
cast a gloom over the whole company - being
so young.
We pitched a camp about 12 m. Today -
No one knows how long we will remain
many say but for a day or two - but we may
be detained longer - I saw Dr. O'donnel at a dis-
tance today but could not speak with him.
No doubt he could have told me of your
safe arrival at home -
The army is being moved at a rapid
rate - Cleburne's Regt. and the Legion are now
here, and Lyon and Cross are just behind -
The whole command will probably
be here in a few days and then we will
know our destination - For the present ow-
ing to want of time I must bid you adieu -
My love to all_ I'll answer Sister F's letter shortly
your affect. son
Elliot H. Fletcher Jr.
If you write, entrust your
letters to Mr Halliday's care [and]
and if we are away from
here, he will convey it to me if you will particularly request it by
personal interview or a note
[Page 2] Dear Anna
Dr O'Donnell brought
this letter and delivered it to Dr [ ]
O'D was with Elliot two hours
and reports Elliot well
I have been sick with
low fever ever since you left
Am better to day_ Will go up to
See Elliot tomorrow on the Cotton
Plant that calls. by tomorrow to
take my corn up to Columbus
by speed order of Genl Pillow
I rather think I will not be
able to go tomorrow but I
Hope to go with certainty by
Thursday on the Kentucky
Yrfather
E. H. J 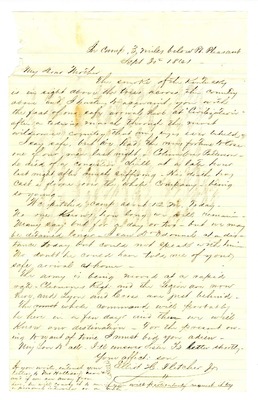