Warren discusses politics in Arkansas and expresses the opinion that Arkansas does not need a Union-supporting man representing the state. He goes on to discuss how the press is vital in the state, and elaborates on how the press has helped military campaigns. Warren goes so far as to ask for assistance on acquiring a printing press for a Mr. George M. Turner of the Turner's Southern Star newspaper, printed in Camden, Arkansas.

Southern Unionists were white people living in the Confederate States of America who were opposed to secession, and against the Civil War. They are also referred to as Southern Loyalists, Union Loyalists, and Lincoln Loyalists. Pro-Confederates in the South derided them as Tories. During reconstruction these terms were replaced by "scalawag", which covered all Southern whites who supported the Republican Party. Andrew Johnson, who would go on to become the 17th United States President upon the assassination of President Lincoln, was strongly pro-Union. This led Johnson to becoming the face for Southern Unionism.

[Page 1] Camden Arkansas August 26th 1861
Honorable H M. Rector
E A Warren dear Sir
The election
is over and victory is ours. A
happy triumph has been
achieved. A good fight
has been fought and we are
victorious. And now it devolves
upon us. to Stay all reinforce-
ments from the enemies camp.
we must still continue to strike
deadening blows, until finally
they die to live no more. And
to do this it requires tact and
caution, as well as prudence
and energy. We must not
cease. Two years from now
the fight will be again, and
now let us be preparing for
the [ ] of 62. Let us
unite first upon some good
[Page 2] strong anti-Johnson man for
the Senate - no milk and cider
man will do. He must have a
worker. A [ ] and indepen -
- dent advocate of our rights.
and now who shall this man be.
We should determine.
And then again our presses should
be sustained and kept ready
for further and future battles.
We have but one organ in this
Section of the State. An organ
that has fought bravely. annured
from favor or reward. One that
will ever stand by us and
assist us to strike the enemy,
and he must sustain it. I
allude to "Turner's Southern Star"
printed in this city. It fought
nobly for you Gantt [and] Hindman
and how will you assist us
[ ] to sustain it, to increase
its subscriptions, to [ ] into
[Page 3] its lands all the printing for
this section that you can in -
- fluence. it devolves upon
you to do it. Had it not been
for the people, this section of
the state would have gone largely
for Johnson [and] Mitchell. Gantt
proffers assistence. will you
do the same. we are making
an effor here to increase its
size to the same as that of
Memphis Weekly Avalanche,
will you assist us. will in -
fantry assist us. Will the anti-
Johnsons men of the State assist us;
They ought to do So. The editor
and proprietor. Geo. M. Turner Esq.
is poor and does not possess
the means to accomplish this
without assistence. But he
will do his part. He is energetic
and faithful. is with us heart
soul mind and body, and he [Page 4] can even rely upon his valiant
services for our cause. Were he
able he would spurn assistance.
in fact he knows something of this
move. and we propose to surprise
him by presenting to him a
large power press and will
do so with proper assistance, he
must sustain our organs or we
will fall. Fall to rise no more!
Enough at present. I have hopes
that our friends every where
will unite with us in our ef -
fort to sustain the press.
Present my kindest regards to
Mrs Rector and tell her I con -
gratulate her upon her victorious
[ ].
Hoping to hear from you very
soon I am ever
your friend
E. A. Warren Jr
Hon. H. M. Rector
Little Rock
[Arkansas] 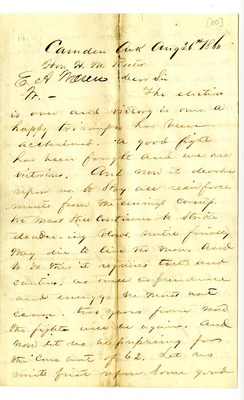