In this letter, Harris Flanagin describes life in camp with Union troops believed to be three miles away. Flanagin's regiment was forced to move back from the road for 2000 Missouri soldiers to pass.

Harris Flanagin was born in Roadstown, New Jersey, on November 3, 1817. After attaining his law degree in Illinois, he moved to Greenville, Clark County, Arkansas, and began practicing law. He served as deputy sheriff of Clark County in 1841, and was elected state representative the following year. He was again elected to public office in 1848, serving in the state senate for two years. In 1851, Flanagin married Martha E. Nash of Washington, Arkansas. They had three children: Duncan, Nash, and Laura. Following Arkansas's secession from the Union in 1861, Flanagin served as representative from Clark County to the Constitutional Convention in Little Rock. Flanagin fought in the Second Arkansas Mounted Rifles during the Civil War. In camp near Knoxville, Tennessee, the news of Flanagin's nomination did not reach him until after the election. By the time he was able to arrange for a leave of absence, a telegram arrived announcing that he had been elected governor. Therefore in 1862, Flanagin left active duty to take office. His administration dealt primarily with war-related measures, maintaining order, and continuing government while enduring an invasion. The capitol at Little Rock fell to Union troops on September 10, 1863, at which time Flanagin moved the state government to Washington, Arkansas. At the end of the war, he received a presidential pardon, but remained disfranchised until 1873. In 1874, Flanagin became a member of the Constitutional Convention and was selected to be chairman of the Judicial Committee. While in Little Rock working to form the new constitution, he fell ill, returned to Arkadelphia, and died October 23, 1874. This letter was sent the very week that the Confederacy first invaded Missouri. Prior to August of 1861, the Union had complete control of the border state. The first major battle west of the Mississippi would take place 6 days after this letter, at the Battle of Wilson's Creek (Battle of Oak Hills).

[Page 1] Stone County Missouri
Aug 4th 1861
Mrs. M E Flanagin
Dear Wife.
We are about
26 miles from Springfield.
Night before last we louped
4 miles back and there
came an order to march
in two minutes prepared
for battle. Many had gone
to bed and you can hardly
imagine the excitement
and confusion that followed.
In about half an hour
we were ready and were
then detained by the passage
of about 2000 Missouri
troops. before they passed
an order came to camp to [Page 2] stay til morning. on yesterday
we come up and were held
ready to move all day and
did not prepare to camp
until night.
It is understood that Gen
Lyon is within 3 miles and
waiting for McCulloch,s [sic] force
to come up. yesterday it
was supposed that Lyon
would advance and we
were prepared for kind.
Our postion is favorable
and I do not think there
would be very differently if
the army would come up.
I am afraid that Lyon is to
smart to be caught napping
we have had plenty but
some companies have wanted
meat.
There are a thousand [Page 3] out. Stight [sic] collisions take
place every day. Nothing
serious however.
Our party is anxious for
a fight and I think both Generals
are manuevering for an
advantage.
Two men were detailed
This morning for a scout from
our regiment and [ ]
eight o'clock til noon.
was I absolutely certain
that this letter would not
be intersepted I send the
recon of our position and
fortification,s.
I have not heard from
home nor has any one
of our company or our
Witherspoons.
Kiss the children for papa
yours H Flanagin 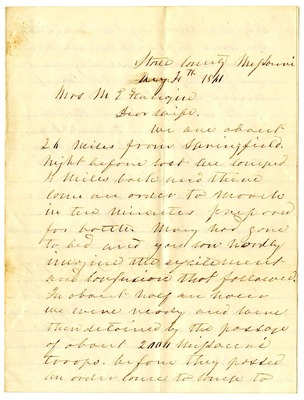