Colonel DeRosey Carroll explains the reason why he tendered his resignation on July 15th, 1861. The reason being that he and his men were being poorly treated by General Pearce. Carroll pleads for a transfer of any kind in order to escape Pearce's command.

DeRosey Carroll, was the commanding Colonel of the 1st Cavalry Regiment, Arkansas State Troops. Carroll led his men into the Battle of Wilson's Creek, Missouri, on August 10, 1861. During his tenure, Carroll was under the command of General Pearce, whom Governor Henry M. Rector held in high regard. Pearce was eventually dismissed by the state military board.

[Page 1] Head Quarters 1st Cavalry Regt
Ark vol Camp Walker July 18th 1861
[Honorable] Henry M Rector
Dear Sir
I tendered to Genl
Pearce on the 15th of this instant my
resignation at Colonel 1st Cavalry regiment
Ark Vol. It was done because
I thought myself and command
had been badly treated by him. If
we are transfered to the southern
Confederacy I am not only willing
I should esteem it an honor to serve my
[blank] the position I now hold by
[blank] and unanimous voice of the
brave men I may have to lead, but as
the thing now stands the idea of justice
and self respect will compell me
to the course indicated in my note
of the 15th to Genl Pearce. It will
not however; rest assured prevent
me from doing well my duty against
the enemmies of our common interest
and sacred rights.
Your friend,
DeRosey Carroll
Turn Over [Page 2] If we are to remain as now, I wish it
understood that the decision of the board
is asked. if a change by transfer or
othewise is made Please withhold and
write me in haste. your friend
DeRosey Carroll [Page 3] Honorable H.M. Rector
Little Rock
ark
18th July 1861
Col DeRosey
to
Military Board 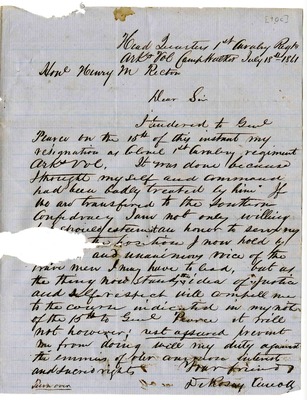