Colonel DeRosey Carroll in his letter, tendered his resignation in service of the Confederate State militia. The resignation letter, dated July 15, 1861, was accepted regretfully. The letter does not state the reason for wanting to resign, but signifies that Carroll was proud of the service, and his superiors felt the same about him.

DeRosey Carroll, was the commanding Colonel of the 1st Cavalry Regiment, Arkansas State Troops. Carroll led his men into the Battle of Wilson's Creek, Missouri, on August 10, 1861. Before the war, Carroll was a wealthy man, owning a plantation, and slaves. Carroll eventually returned to his plantation before the war's end, but was assassinated by a Jayhawker, a member of an anti-slavery guerrilla group, in 1863.

[Page 1] Head Quarters 1st Cavalry Regiment
Ark Vol camp Walker July 15th 1861
Sir,
I beg leave to tender to you my
resignation as Colonel 1st Cavalry Regiment
Ark vol.
I have honor to be
Your Obt. Servant
DeRosey Carroll
To Brigader Genl N B Pearce
Commanding 1st Division
Ark Vol ___ Camp Walker [Page 2] 15th July 1861
DeRosey Carroll
To
Military Board
Camp Walker July 15th 61
DeRosey Carroll
Col 1st Calvalry
Tenders his resignation
Head Quarters
1 Div Army Ark
July 15th, 1861
I most respectfully rec-
commend that the re-
quest of Col Carroll
be acceded to. At the
same time regret to lose
so good [and] brave a man
from the service of the
state - But the Colonel
cannot be induced
to change his mind [and]
therefore I hope your
honorable body will
grant his request [and]
accept his resignation.
Very respectfully
N. B. Pearce
Brig Genl. 1 sw
Army Ark 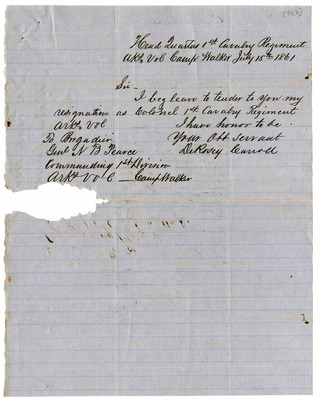