Letter and voucher by David Walker and Brigadier General N.B. Pearce in the amount of $10,000 for the purpose of defraying the expenses of the military operation.

Hall of Convention
May 13. 1861
Wereas, by the fifth section of the or-
dinance adopted by the State Convention
on the 11th day of May A.D 1861 "for raising
and equipping a military force in the
North Western and North Eastern positions
of these frontiers", it was ordained that
the sum of twenty thousand dollars, that
is to say, ten thousand dollars to each
of said divisions be and the same is,
hereby appropriated for the purpose of
organizing all necessary expenses of
military operations on the positions and
the state treasurer was thereby ordered
to issue the same on the warrant of the
President of the Convention.
Therefore the Treasurer of the State of
Arkansas, is hereby ordered and ex-
pected to pay to Nicholas B. Pearce,
Brigader General of the second
Division of Arkansas, the sum of
ten thousand dollars out of
the said appropriations for the
purposes aforesaid.
David Walker President 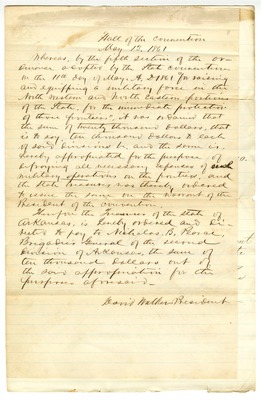