Two letters written by Judge A.B. Williams. The first letter is written to John R. Eakin, editor of the Washington Telegraph newspaper asking Eakin to run Williams' letter. The second letter is written to Governor Harris Flanagin informing him that publication of his letter has been rejected and sharing his thoughts on the state of current affairs in his area.

Copy
Washington Ark Jany 28th 1865
Hon A.B. Williams Judge Judicial Circuit
State or Ark - Dear Sir
I entirely agree with you
as to our views of the Constitutional question and highly approve
your [illegible] in wishing to couch what you consider dangerous to
public liberty - I think however that our military authorities have
not been actuated by any improper motives, and make us doubt
that anything wrong will be speedily(?) connected -
With your consent, I would like to decline publishing the above
on the grounds that it contravenes the policy of our [illegible which has
so far are deemed to possess the utmost harmony and good feeling
between citizens and our military commanders - It is proper,
however, to add, that your position as a high [illegible] officer
of the State and a conservator of public liberty, fully [illegible] your
remonstrance against any thing which you may suppose
to be an unnecessary infringement upon our Constitution and
laws.
Your very truly
(signed) Jno R. Eakin [Page 7:] Washington Ark. Jany 28th 1865
His Exclcy H. Flanagin
Governor of the State of Arkansas
Sir,
I have the honor of transmitting
herewith a communication written by me, for publication
in the "Washington Telegraph", but which Col Eakin (the editor
of that paper) has declined publishing, for the reasons assigned
in his note to me of this date, a copy of which you will find
attached to the communication above mentioned - This is sub-
mitted to you, as the Chief Executive of the State, and the
principal conservator of the Constitution and laws, with the
intention of calling your attention officially to the cause of
complaint specified in the article, - I feel well assured
in my own mind, that my position is correct, and that
I am waranted as one of the conservation of the house of
the state in remonstrating against a course of conduct,
which is palpably in violation of the Constitution of the
Confederate States, as well as the State, - I would not be
willfully guilty however, by any course of mine, in producing
dissensions between the civil and military powers, and hence,
have consented to act upon the advice of Col Eakin in not
insisting upon the publication of this article,
I am not informed from what source the orders
directing a search issued, whether from District or
Department Head Quarters
Should you think the importance
of the subject merits an investigation, you are at liberty
to use my communication as your judgment or discretion
may dictate -
I have the honor to be
Your Excellency's
Mo Obt Servt
A.B. Williams 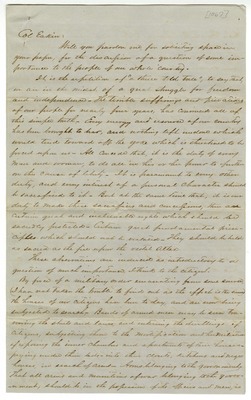