Letter from Josie King in Woodville to an unnamed friend. King apologizes for the delay in writing back to her friend. She writes that no Federals have discovered them but they do see the occasional Confederate soldier. She relays news she heard about his family members and responds to his request that she not marry until he sees her again with assurances that "there is no danger of that while this war lasts."

[Page 1] Woodville Feb 19th/64
Dear Friend
[illegible] weeks have
elapsed since I received your epistle
but a favorable opportunity of sending a letter
not presenting itself before, I have delayed
writing thus long. I assure you it was
no intentional neglect on my part, for
I did intend to respond some time
since to your worthy missive.
I acknowledge that I might have sent a
letter by one or two person that have
been here, but they were entire strangers
to me and I did not know whether to
presume to request a favor of them by
asking them to mail a letter.
I now have an opportunity of sending a
letter to Monticello, to your bro. George
[Page 2] by some soldiers with whom I am
acquainted, to be forwarded to you.
I shall beg you in the beginning to excuse
me for not writing a long letter. I have
time to write only a short note.
You made the supposition in your
letter that the Federals had visited us before
I am happy to inform you that as
yet they have not discovered us. We now
see Confederate soldiers occasionaly[sic], and
I do not think the Federals will visit us
so long as any of them remain in here.
There are a good many soldiers at
Monticello which is only twenty-five miles
from here. Both of your brothers are there.
I whish Mr. Wright or some of you would come
here to see them and them come
on and stay some with us. how happy would
we be to see a friend.
We had a very unexpected visit week before
last from my sister Ella who has been
over with Gen. Bragg's army; but she did
not remain with us a week before she
[Page 3] returend to Georgia and Sister Fannie
went with her. It was a great trial to
give her up so soon[,] especially since it
had been so long since we had seen
her, and then for another sister to go, Oh!
it made us so sad. Ma would never
have consented for Sister Fannie to have
gone if her health [several illegible words]
bad and she thought the trip might benefit
her.
You told me in
your letter that I must not marry until you
[illegible] me. I can assure there is no
danger of that while this war lasts.
Tell your Ma I am very much oblidge[sic]
to her for the turkey(?) red. I am afraid she
deprived herself.
Give my best
love to your Ma and Mrs. Morgan also
the children. Ma joins me, kindest regards
to Major Wright. Good night, I must
go and do some sewing for a soldier tonight
Your friend
Josie King 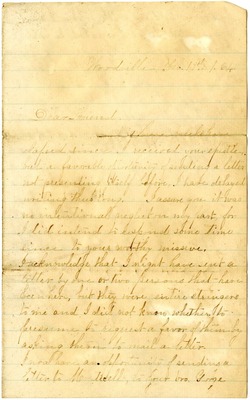