Letter from W.M. Fishback to David C. Williams about using the newspaper as a tool to keep pro-Union sentiment alive in the state and to use Union Clubs from other counties to give the impression of activity.

[Page 1] Greenwood
Apl 10th 1861
D.C. Williams Esqr:
Dear Sir:
I engaged some
sixteen subscribers to the Press, whose
names, together with amount of subscrib-
tions, I sent by Mr Gross of your town.
I hope the editor will spare no pains
in his effort to give his paper efficiency
as a campaign paper. Let it Strike
and strike hard! Let it keep,
until the election, in its editorial
Column, in large characters, the vote
on Garland's Resolutions--also Bob
Johnson's Vote on the Crittenden Res.
or rather his refusal to vote. Let
it have two leading objects, which
I find most effective with the
people, Viz: to show a settled
design to brake[sic] up the Government
on the part of secessionists and to
prove their hostility to compremise.
above all teach the people not to
look to Congress for an adjustment.
They already ask why Congress hasn't settled the
[Page 2] matter and even begin to dispair[sic]
Let us organize Union Clubs
in the several Counties and make
at last as great show of zeal as
possible! It encourages the people.
Already I have heard even good
Union men saying that the state
will secede and so conclude be-
cause, they say, the secessionists
are making so much greater
efforts than the Union men. You know
that it is but an easy transition
from despair to recklessness and
ever to absolute conversion. Let us
prevent this. Let the Clubs march
frequently and have addressed by
men from the counties. It will give
appearence of activity, and zeal which
will encourage. It is not much trouble
for instance for W Turner or W Thom-
ason to visit the adjoining counties
and make a speech. So with [illegible]
from the counties. So far as I am
concerned I am willing to do all I
can. Indeed, I have been so much
misrepresented, I feel very inclined
to vindicate my views in all the
adjoining counties, after the 22nd of this
month I designate that time
[Page 3] because I desire, When I do speak,
to do so in reply to
Senator Johnson. Who will doubtless
be but too successful in misleading
the people.
It could be well if a number
of Washington's Farewell addresses,
(with the ancedote of the Secessionists
who upon hearing a postion of it read
and ignorant of its author, said
he wanted to hear no more of that
damned stuff. He would but be
was a submissionist, appended)
sent out to Scott and Franklin
counties.
Very Truly
In great haste
W.M. Fishback 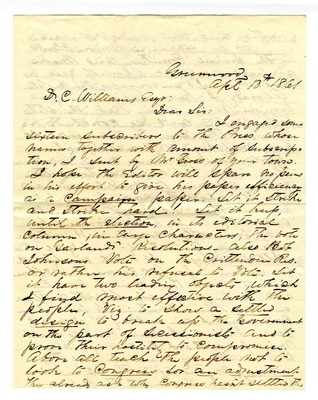