This docket lists the cases seen over the course of two days in May of 1822, including the attorneys, plaintiffs, defendants, and cause.

Before Arkansas became a state, county courts were only held a few times a year due to the hardship of travel and the citizens' need to tend to their homesteads. In May of 1822, Lawrence County held its first term of court for the year. Several of the cases ended in a "capias" being issued. A capias is an order issued from the judge to the sheriff and most commonly would have been a summons for the defendants to appear for sentencing or to pay a fine. 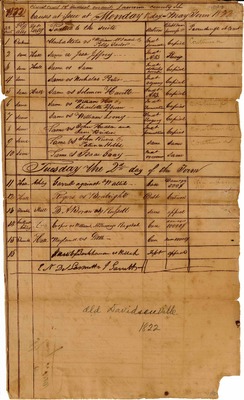