These court documents include an appellate judgement, appeal court proceedings, and an execution in the case of Peyton R. Pitman v. William Watson.The first document is a copy of the Appellant Judgement which has a list of the accounts costs and states that William Watson had taken oath to remove two suits brought against Payton R. Pitman. The second document is the appeal court proceedings, which lists the names of the six jurors, who found in favor of the defendant, William Watson.The third document is an execution showing that Payton R. Pitman finally won an appeal to collect damages for William Watson in the sum of fifty-four dollars and fifty cents. This document also includes a comprehensive list of the court fees that added up to a fairly substantial amount.

Ferries were necessary for transporting people, livestock, and goods across the rivers in Arkansas. It could be a risky business and ferrymen were expected to maintain their boats in well-working order to serve the population moving back and forth across the waters. The sinking of a ferry could cause serious injuries, cost lives, loss of property, and ruin businesses. Peyton R. Pitman was a well-known ferryman in Arkansas due to his location near the military road's entrance into the territory. An interesting note about this case is the presence of Richard Searcy, as Pitman's attorney. Searcy was an active lawyer and holder of various political positions in Northeast Arkansas throughout the territorial period. 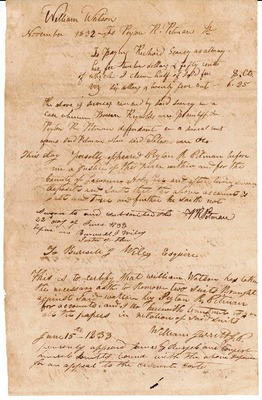