These probate documents of Samuel Wyatt include an administrator's bond, list of assets, fees, and a statement regarding inheritors. The Administration Bond notes that Daniel Martin and Charles Crebough are to act as executors and administrators to Wyatt's estate. The list of assets records the items sold from the estate and by whom they were purchased. The list of fees records amounts due for the funeral and final expenses of Samuel Wyatt. The final item is a sworn statement from Daniel Martian revealing that he found three legitimate children of Samuel Wyatt, residing in Tennessee.

Samuel Wyatt was an early New Madrid County settler from Tennessee. He died just before the establishment of Lawrence County and became the first probate case on record for the county. Probate court handles a person's assets and is therefore most commonly involved after someone passes away. However, adoption, guardianship, and a person being declared mentally insane are also handled by probate court. The court will assign administrators who are charged with assessing a person's assets, finding inheritors, and disposing of assets in an appropriate manner.

[Page 1] Know all men by these presents that we Daniel Martin and
Charles Crebough of Lawrence County in the Territory of Missouri are
held and firmly bound unto William Clark Governor of Said Territory and
his Successors in office in the full and just Sum of One hundred and thirty Dollars
to be paid to the said Governor and his successors in office, to which payment
well and truly to be made and done we bind ourselves, our heirs, executors and
administrators, jointly and Severally, firmly by these presents, sealed with our
Seal and dated this twenty fifth day of July in the year of our Lord One
thousand eight hundred and fifteen__
The Condition of this obligation is such
dthat if the within bounden Daniel Martin administrator of all and singular
the goods, chattels, eights and credits of Samuel Whyatt deceased do make or
cause to be made a true and perfect Inventory of all and Singular the goods
chattels, eights and credits of the Said deceased which have or shall come
to the hand possession or knowledge of him the Said Daniel Martin
or into the hands or possessions of any other persons or persons for him and
the same so made do exhibit or cause to be exhibited into the office or
the Circuit Court for the County of Lawrence at or before the third Monday
in September next ensuing and the Same goods and chattels, rights and credits
and all other the goods chattels, rights and credits of the said deceased at the
time of the death of said deceased which at any time after shall come to
the hands or possession of the said Daniel Martin or into the hands
or possession of any person or persons for him: do well and truly administer
according to law, and further do make or cause to be made a true and just
account of his said administration at or before the nineteenth day of
June 1816 and all the wit and wisdom of the said goods; chattels,
eights and credits, which shall be found remaining upon the said administrater's
account the same being first examined and allowed by the Circuit
Court for the County of Lawrence and shall deliver and pay to such
paerson or persons respectively as the said Court by their decree and
Sentence, pursuant to the true intant[sic] and meaning of the law, shall appoint
and direct. And if it shall hereafter appear that any last will and
testament was made by the said deceased and the executor or executors
therein named do exhibit the same into the office of the said Court
making request to have it allowed and approved, and the said will is allowed
(page2)
And approved by the said Court, then if the said Daniel Martin
within bounded, being thereto requested, do render and deliver his Said letters
of Administration then this obligation to be void and of no effect, otherwise
to remain in full force and effect.__
Daniel Martin
Charles Crabough
Signed Sealed and delivered
in presence of Lewis de Mun Clk[Clerk]
(sideways)
Daniel Martin and
Charles Crebough's Administration
Bond. To W.C. Goven.[Governor] [Page 2] Inventory of all the Singular Estate of Samuel
Whyatt Deceased, as sold on the 12th day of
August 1815 to the highest bidder by Daniel
Martin Administrator at a twelve Mouth[sic] Credit.
Names of buiers[sic] -rtiely $[dollars] Ce[cents]
Daniel Martin | a great boat and rappers | __ __ _ _ _ _ | 5 | 25
David door _ _ | a pare[sic] of pace taloores a shirt
Two waist coats and a body coat | _ _ _ _ _ _ _ _ _ |5.|0
Chareles Crabough|one Mare and Colt_ _ _ |_ _ _ _ _ _ _ |40|50
Christopher barwhard |one pare of Saddle bags|_ _ _ _ _ _ __|3|0
Daniel Martin|Saddle and bridle _ | _ _ _ _ _ _ |2|75
Daniel Martin | a hat _ _ _ _ _ _ _ | _ _ _ _ _ _ |0|50
John Wells _ _ |a Rifle gun and ----
teen cuts _ _ _ _ _ |_ _ _ _ _ _ _ | 10|0
Daniel Martin|one butcher Knife_ _ |_ _ _ _ _|1|0
Daniel Martin|a hatchet_ _ _ _ |_ _ _ _ _ _ _ |0|50
William h-----|a improvement _ _ _|_ _ _ _ _ _ |2|0
|70|75 [Page 3] Samuel whyatt deceased, - - -(debts) to daniel martin
his administrator, from the 5th of --- 1814 $ Ce[cents]
to attendance in his last sickness _ _ _ _ _ _ |15|0
to his Coffin and burial expenses _ _ _ _ _ _ _ |12|50_
to feeding and -atning of his horse previous to his death|3|50
[crossed out]to taking out - - - - of Administration _ _ _ _ _ |2|0
Clerks fees for letters of Administration _ _ _ _ |3|0
fees paid to the appraisers _ _ _ _ _ _ _ _ _ |3|0
[crossed out]to selling of property _ _ _ _ _ _ _ _ _ _ _ |7|3
to keeping of his horse from the 5th of --- 1814
the date of his death until the 12th of August
1815, the date of the sale _ _ _ _ _ _ _ _ _ _|10|0
to clerks fees and other expenditures _ _ _ _ _ _ _ |2|0
[crossed out]to attending Courts in ---- of the ---
--strationship _ _ _ _ _ _ _ _ |5|0
|63|3
[crossed out]total amount $|63|3
six per cent on amt[amount] of sales | 49|
[Page 4] Territory of Missouri
County of Lawrence
Circuit Court In vacation July 25th 1815
Daniel Martin Administrator of the Estate
of Samuel Whyatt deceased being duly sworn, deposeth and saith that
to the best of his knowledge the said Samuel Whyatt deceased, had three
legitimate children in the State of Tennessee. ___
Daniel Martin
Sworn and Subscribed
at my office in vacation
Lewis de Mun Clk.[Clerk] 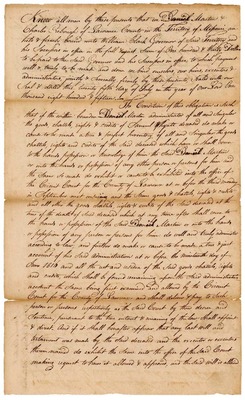