Document, summons for Robert B. Musick

These are two summons for Robert B Musick to appear in court and answer for the indictment of perjury. These documents show the change in the name of the county seat from Lawrence to Davidsonville

These two documents show the change in the name of the county seat from Lawrence to Davidsonville. As late as December 1816, the county seat of Lawrence County resided in what was known as the town of Lawrence. However, residents chose to change the name to Davidsonville in honor of Missouri Territory Legislator, John Davidson, who was an important influence in the town. This left the previous name barely noted in history. 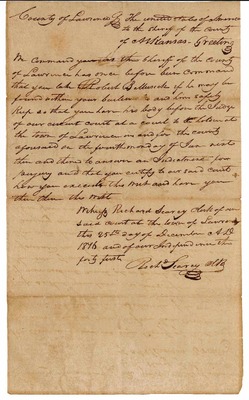