This document contains two depositions of witnesses in the case against John S. Moore for unlawfully detaining a young slave boy.

Through the accusing words of two men, a more dynamic vision of Arkansans' views on slavery comes into focus. John Moore, through his proclamation that there was no wrong-doing and that Hammond shouldn't have the boy, appears to care more about a family staying together than ownership.

United States v. John S Moore: Negro[sic] Stealing
John B. Hammond of lawful age being
duly sworn according to Law deposit and saith that
on the evening of the 10th August intent about - - -
a negro[sic] man named Hubbard and a negro[sic] woman
Jane both belonging to John S Moore came to his home
and wished to see the negro[sic] boy Elbert (about six years old) which he has
in his possession and which was a son of said Hubbard
and Jane which this defendant admits and that they
stated their master had permitted them to come and
see the child and stay the night. That this - - -
the said Hubbard and Jane with this child
Elbert into a separate room from his family and
that he went to sleep about 12oclock and waked about two oclock
and said negroes[sic] were all gone and that said
Boy was his property as executor of Henderson White
deceased and the same for which he obtained
judgement in the circuit court against John S
Moore
Sworn and subscribed before me this 13th August 1835 D.W. Lowe, JP: John B. Hammond, executor of H. White Dc.
William Summer of lawful age and being duly sworn depose and says that on the 12th instant
in the county of Lawrence and State of Arkansas
he went to the house of John S Moore in company
of Mr Wm. Hart Constable and that Mr Heart
had taken the negro[sic] woman Jane in his custody
and Mr Moore said he should not take her for
the negroes[sic] had done nothing more than what
he had told them and that he had the negro[sic] boy
and this deponent[sic] further says that on the same day
before the arrival of Mr Hart this deponent was at
Mr Moore's and saw the negro[sic] child, which
Mr Moore said was the same that Mr
Hammond had had and Mr Moore further stated
that he had permitted Hubbard and Jane to go to
Mr Hammond's at the request of Mr Hammond
and that they were at home with the child in the
morning before day and that Mr Moore then said
Mr Hammond should not have the child
William W Summers
sworn and subscribed before me this 18th August 1836 D.W. Lowe JP
William Hart being duly sworn according to Law
depose and say that on the 12th August 1836
in said county he went with a process to Mr Moore
which he had against his negroes[sic] Hubbard and
Jane and Moore told him he would not permit
him to take his negroes[sic] for they had done no
more than he had told them to do and if a crime
was committed at all he would suffer himself
and that he had the negro[sic] and that Mr Ham-
mond should not have him. Wm. Hart
sworn and subscribed before me
this 18th August 1836 D.W. Lowe JP 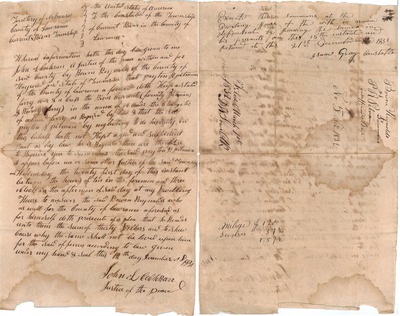