This is Henry Linen's original complaint to the court about the kidnapping of his daughter as well as the judge's order to appear and the sheriff's findings.

Unfortunately, the full saga of Minerva/Patsy's life is unknown. From the records available, it appears there was a custody issue over the little girl. Her father, Henry Linen, attempted to regain custody of his daughter but the sheriff was unable to find her when he served the summons.

To the honorable Thomas P. Eckridge judge of the third
circuit in the Teritory[sic] of of[sic] Arkansas
Henry Linen respectfully represents to your honor
that on or about the twentieth of May 1828
one Hiram Massingale came to the house
of one Richard Brazil in this Lawrence
County where the wide of your petitioner
then was with a certain child of your petitioner and the
said Massingale then and there seized and took
with great violence and carried away the
said child above named which child
being called Minerva by your petitioner
(but since called Patsy by the said Mas-
singil) your petitioner prays from the
above premises that your honor would
grant writs of habias corpus and such
other writs of processes as may be neces
sary to bring the said child before your
honor forthwith so that your petitioner
can acquire possession of his said child
if in justice and according to the rules of
law he ought to have the said child and
your petitioner will ever pray etc.
Henry X Liner (his mark)
Sworn to and subscribed
in open court before me
Thomas Eucory, Clerk, CC.
To the Sheriff of Lawrence County
Greeting
We Thomas P Ekridge, judge of the third judicial circuit
in the Territory of Arkansas command you that
the body of Minerva alias Patsy Linen alias Patsy Massingill
under the custory of Hiram Massingill together with the day and cause of her
being taken and detained by whatsoever name, you have
before us at the town of Jackson in the county of
Lawrence at nine of the clock tomorrow, then and there
to do, submit to and receive whatsoever we shall
consider in that behalf. Witness my hand and seal
this 1st day of September 1829 Thomas P Ekridge
Executed this write by reading the same to the within
named Hiram Massingell at Spring River Township The body
of the within named Patsy not found
Jackson 2nd Sept 1829
Service $1.60
mileage circular 1.00&
J. M. Kuykendall Sheriff 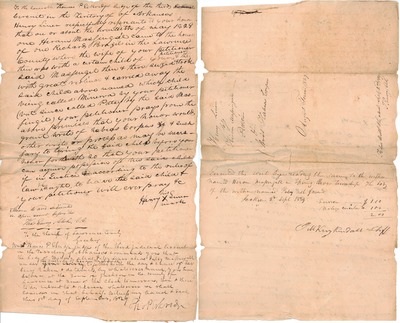