This is the statement of the defendant, William Kellett, in response to the slander suit brought against him by Betsy Hardin.

In an effort to avoid paying a potentially hefty judgement against him for slander, William Kellett penned this laughable retraction regarding his damaging statement of Betsy Hardin. Evidently, he heard on the rumor mill that Betsy had a child out of wedlock that she left behind in Missouri. Betsy was furious over the accusation and filed a slander suit. Kellett's response first denies he said such a thing, then allows that he might have said it while drunk, and finally admits to saying it but asserts he believed it was a total lie. He concludes by praising Betsy's reputation.

Territory of Arkansas, Lawrence County, Union Township: Whereas there has been
statements made to Betsy
Hardin that I should have
stated against her carrecter[sic]
which statement has caused her to bring suit
in court against me in saying that she had a
melato[sic] child in Belview[sic] and had to leave her
country the assersion[sic] I deny every say
ing if I did I was intoxacation[sic] or so out of my
senses that I did not know what I said for I ackn
owledge the report to be a lye[sic] and grownless[sic]
and without any fondation[sic] whatever -
I further acknowledge that I did say something
about a flying report of her having
a child in Belview which I believe was raisd[sic]
by some lying malicious person and I believe
to be a lye[sic] and did believe it to be a lye[sic]
when I mentioned it but did it through a
rage of mallice[sic] against the family in a
melicious[sic] way for no other cause but revenge
But I acknowledge I have lived a close
neighbor to her and her father for the sum
of about six years and she has behaved her
selfe[sic] a prudent and virtuous young woman as
any other woman that is in our county as
far as I have heard or have knowledge.
William Kellett[signature]
On the eigth day of May 1822
William Kellett personally apeared[sic] before me
an acting justice of the aforesaid county
and territory and acknowledged the within
stipulated to be his free and voluntary act
William Janes[signature]
William Kellett to J. Hardin, William Kellett acknowledgement, Filed for record May 18th 1822 - - -
[upside down] Territory of Arkansas, County of Lawrence: Be it remembered that in the
eighteenth day of May in the
year of Christ eighteen hundred and twenty two, the
within and foregoing was - - - for record which was
the same day duly recorded in Book B pg 378 and 379
Hy. Sanford, Clerk 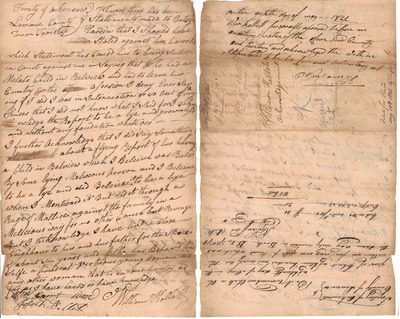