This is the prosecuting attorney's indictment of William Henderson and Samuel Caruthers for dueling with pistols.

Dueling was a popular tradition for settling matters of honor between men from the 17th century through the early 19th century. By the time of the Civil War though, it's popularity had declined. Legislation continually condemned dueling but it didn't fully stop until public opinion shifted away from the dangerous practice. 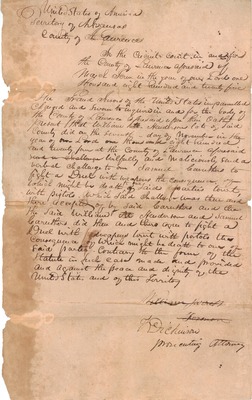