This document describes the findings of the grand jury and stand-in coroner who examined the body of Polly Hillhouse and other evidence. They concluded that Polly was fatally shot once in the back by a rifle and that the perpetrator was her slave, Jarrett.

In 1831, Polly Hillhouse was found murdered in her home. She had been shot by her own rifle. An official inquest was conducted by Thomas McCarroll, a local Justice of the Peace. Inquests are judicial inquiries to ascertain the facts relating to an incident, particularly sudden or suspicious deaths. Her slave, a young man named Jarrett, was immediately blamed and charged with murder. Inquests provide a unique snapshot into the community with the list of "good and lawful" householders.

Territory of Arkansas County of Lawrence: of the United States of America
An inquisition intended taken at Polly Hilhouses[sic] in the county of Lawrence
on the 13th day of July before me Thomas McCarroll a justice of the peace
acting in the plase[sic] of the coroner[sic] for this County. In taken and holding an inquisition
when the body of Polly Hilhouse then and there lying dead upon the oaths of
Benjamin Perkins, Nathanial McCarroll, Edward Ritchardson[sic], Eli Sheckley,
William Heron, Jarrett Woods, Washington Cooper, William MnKnight Senior,
James McKnight, William McKnight Junior, Miles Williams, Samuel
Raney, Samuel D. Gibson, Willis Phillips, James A Steedman, Joseph
Ware, William King, Drew Ritchards[sic] good and lawful one[?] householders
of the Township of Strawberry of the said county who being sworn and charged
diligently to inquire and trice[sic] presentment[sic] make how, in what manner and
by whom the said Polly Hillhouse came to her death upon there[sic]
oaths do say, that Polly Hillhouse was wilfuly[sic] and intentionly[sic] murdered
with a rifle shot through we believe the ball enterd[sic] under the right
should and come through her right breast which instantly caused her
death which murder we do believe from every sircomstance[sic] was committed[sic]
by her negro boy[sic] Jarrett.
In witness whereof as will the aforesaid coronor as the jurors aforesaid have
to this inquisition out their seals at the place on the 14th day of July
A.D. 1831
Papers for the circuit court in the case United States v. Jarrett a negro[sic] for murder Proceedings held before Tho. McCarroll Esq. Filed Nov 21st 1831 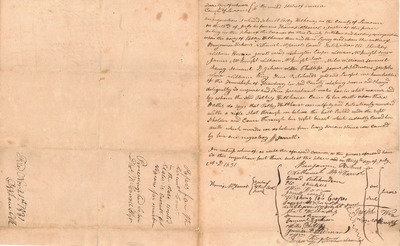