Letter from Ernestine Copeland to her mother, Annie Rector Copeland.

Little Rock Ark October 10th 1892
My dear mother
I thought I would
would [sic] write to you to see
how you was feeling [sic] this
morning. Angie and Base
coming over there tomorrow.
(?) and Mattie Willford
had a fight today in school.
Ethel Jefferson had a shaking
chill in school today
I am getting tired of
writing now.
So Goodbye
from your child
Ernestine (?) Copeland
Answer soon 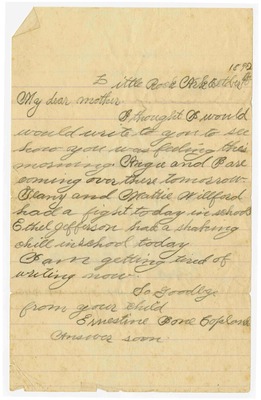